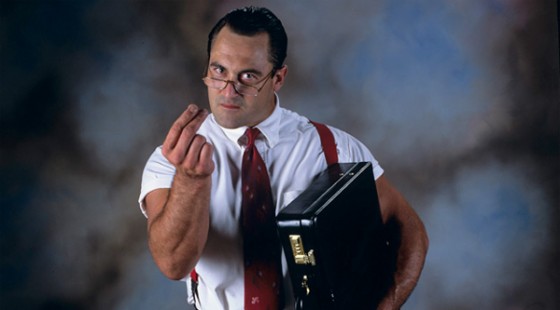 The I.R.S. doesn’t take kindly to your penchant for coming up lame on Tax Day. It could be much worse, you could have to answer to Mr. I.R.S. himself, Irwin R. Schyster. NWA legend Mike Rotunda became IRS in the early 90s for the WWF, and used a “tax-man” gimmick to rile up fans and opponents alike. He was one of the better “technical” wrestlers of his day, and his work on the mic made him one of the more despised heels during his run as Irwin. His finishing move, the “write-off”, was one nasty flying clothesline that made opponents pay the price.

Get your slips, receipts, and tax forms in order today, or Irwin R. Schyster may be paying you a visit. Here’s some tax tips from the man himself:

…and your reward for filing your taxes on time is this match vs. Bam Bam Bigelow: