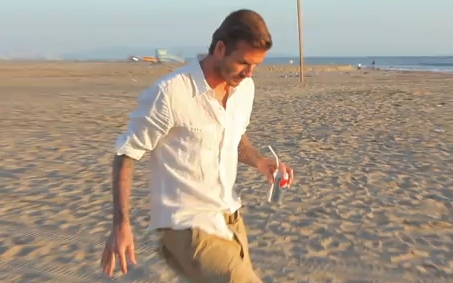 We’ve seen soccer players pull off some pretty unthinkable tricks that defy the laws of physics, gravity and even common sense. David Beckham is no stranger to the perfect pass or well executed play, as seen in this video highlighting some of his best crosses/kicks during his time with Manchester United, Real Madrid and England’s national team.

However, a recent video featuring Beckham delivering three perfect kicks into three trash cans on a beach of all places has caused the question to be raised – is the video real or fake?

The story behind the video is that while on the beach filming a new commercial for Diet Pepsi, the event that unfolds in the video below happened spontaneously. The reactions to Beckham’s kicks would make you believe the events are unfolding right before the spectators’ eyes, and are more importantly, quite real.

Beckham undoubtedly has some ridiculous soccer talent, but this video has all the qualities of being of the fake variety. For starters, the “viral” nature of the video alone screams that this is staged and planned. It just so happens that while filming for a related commercial, Beckham was able to pull off a pretty miraculous stunt? Coincidental timing.

Add in the fact the location is a beach of all places (not the best footing) and that the sounds of the trash cans and the trajectories the balls take are suspicious, this video should fall squarely in the cool, but fake category.

When asked about the video, Beckham stated to the LA Times that “of course” the video is real. We’d like to believe Becks, but this isn’t the first time a star soccer player has stated a viral commercial is real despite common sense indicating otherwise – see Ronaldinho and this old Nike commercial.

You make the call – real or fake?