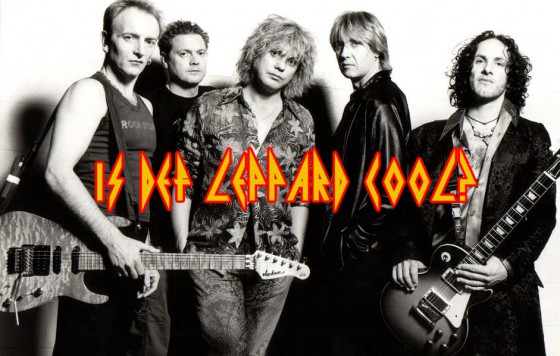 Like other bands, Def Leppard’s career had a rapid ascent, a very high peak despite typical rock n’ roll issues, and a sliding board decent. They started off as a small band with an explosive first couple of albums, took the world’s center stage in the mid 80s, stuck around throughout the 90s with decent albums that only true fans listened to, then jumped the shark in the 2000s with albums so terrible that even their loyal audience found themselves not liking them anymore.

But in music, should the winter of a band’s career be considered when deciding whether they are ultimately cool? You can always say they used to be cool, but that would be like saying Stephen King was a good writer, or Lauren Bacall used to be a good actress. If artists quit while they were ahead, and didn’t ‘damage their legacy’ with late career, watered-down and ‘experimental’ moves, projects or creations, then they would be much easier to define. But very few leave the game on top, and even fewer are good enough to remain relevant after their so-called ‘prime.’

Now back to Def Leppard. Assuming you’re reading this, then you already know something about the band, and I’ll spare you the history. Instead I’ll go album-by-album to show the bell-curve of their career, and at the end you can vote if they can still be considered ‘cool.’ But first, here they are at their very best: 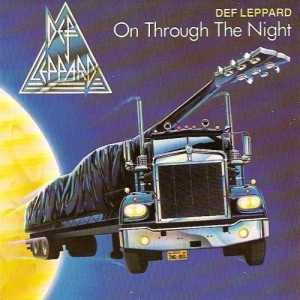 Def Leppard introduced themselves the way young, long-haired rockers should – with raw, in-your-face rock ‘n roll, with that fresh, we’re-here-to-stay spirit. While no true classic songs came off of this album, as a whole, On Through the Night is the type of record that all new rock bands should strive to put out if they really mean business. These young Brits have talent and they’ll make it far in this business.

Best songs: Rock Brigade, Sorrow is a Woman, Satellite, When the Walls Come Tumbling Down, Wasted, Overture.
Buy On Through the Night on Amazon 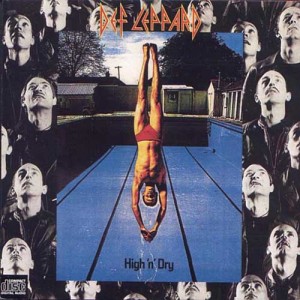 Enter “Mutt” Lange, one of the most successful producers of our time. And like many other successful bands with lots of energy and ideas, Def Leppard’s followup to their first album was relatively quick and didn’t stray too far from the same sounds. But this one had a signature song, Bringin’ on the Heartbreak, that made more people take notice (Mariah Carey covered this song in 2002 – it’s one of the few songs that sounds good in completely different genres of music). 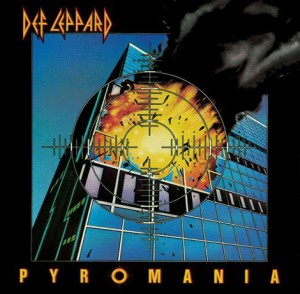 It was time for Def Lep to really make their move, and Lange led the Brits to super-stardom with Pyromania, which only followed Michael Jackson’s Thriller in sales figures that year. The song Photograph made them the ‘it’ band, and with this album, they made their point: They’re awesome. 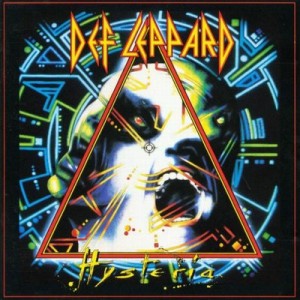 Then came some real problems. Sure, they had the standard drug-and-alcohol issues like any band did, and had to replace members, but when the drummer, Rick Allen lost an arm in an auto accident, and Mutt Lange decided not to return as producer, it wouldn’t be easy to follow up on Pyromania. Four long years later, with Lange, who decided to come back, Def Leppard released their masterpiece album, Hysteria, with Rick Allen on drums despite having only one arm. Pour Some Sugar on Me came blaring out of the U.S. radios and the album flew off the racks. In all, the record had seven hits. By the end of the 80s, Def Leppard had sold more albums than any other rock band in the decade, even more than Guns N’ Roses and Bon Jovi. 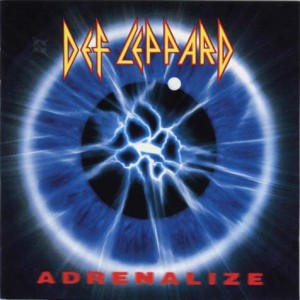 Bad habits caught up with guitarist Steve Clark, and he died. The 80’s Glam Wave ended (See Gunaxin’s 80s Glam: When Metal Was Still Fun) as Nirvana and other Seattle-area bands made Grunge mainstream, and 80s bands were no longer cool. However, Def Leppard still managed to put out an album that people bought, as Let’s Get Rocked hit the charts, followed by five other hits. Though it’s a good album overall, it had the potential to fall flat considering this genre of music was on the decline.

Best songs: Let’s Get Rocked, Heaven Is, Make Love Like a Man, Tonight, White Lightning, Personal Property, Have You Ever Needed Someone So Bad
Buy Adrenalize on Amazon 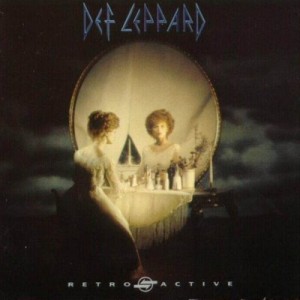 A compilation of B-sides and previously unreleased tracks, Retro Active wasn’t supposed to be a big hit, but it still sold more than 3 million copies as Two Steps Behind was featured in the Arnold Schwarzenegger film Last Action Hero. True fans were still listening.

Best songs: Desert Song, Two Steps Behind, She’s Too Tough, Miss You in a Heartbeat, From the Inside, Ring of Fire, I Wanna Be Your Hero
Buy Retro Active on Amazon 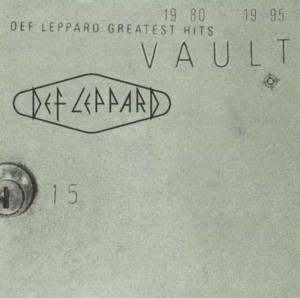 Typically a sign that a band is way past its prime, Def Leppard released a greatest hits album, with a new song, When Love & Hate Collide. Like with many bands, those who bought this album were mostly the ones who had previously liked Def Leppard but never bought their music before. It sold 8 million copies. 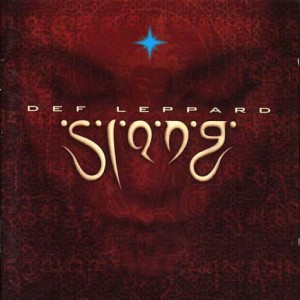 It’s the late career experimental time. Def Leppard tossed aside their traditional sound and tried new things. It resulted in an album that only cult followers would purchase. Though it contained awful songs like the title track, and Breathe a Sigh which was supposed to sound like a Boys II Men track, songs like Pearl of Euphoria became favorites that few had discovered, and lyric-lovers found poetry to appreciate in Where Does Love Go When it Dies.

Best songs: Truth?, Turn to Dust, Blood Runs Cold, Where Does Love Go When It Dies, Pearl of Euphoria
Buy Slang on Amazon 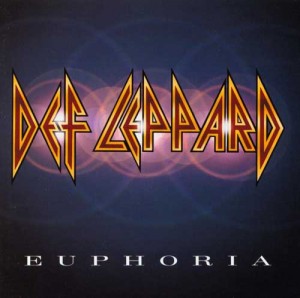 Def Leppard returned to their classic sound and reunited with Mutt Lange. Promises hit the air and this would have been one of their biggest hits had it been released ten years earlier. The album had many other good songs but no one other than the true fans even bothered to listen. 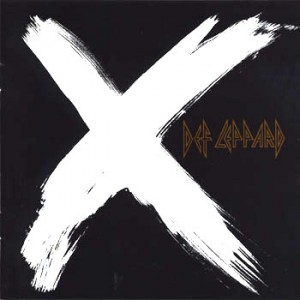 Def Leppard suddenly decided to be a pop band, and though fans still showed up for their concerts, the album was not a success. 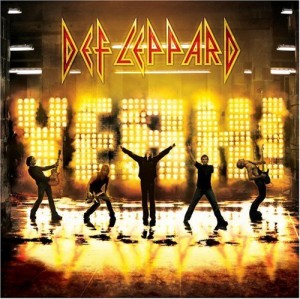 Still touring, Def Leppard released an all-covers album which paid homage to classic rock songs of their childhood, by bands such as Blondie, The Kinks, Sweet, ELO, and Badfinger among others. The problem with this album was that many fans who grew up with them in the 80s didn’t really know these 70s songs, nor did they like them. In fact, most of them outright sucked. David Essex’s Rock On was okay, but hardly anything worth running out and buying.

Best songs: Rock On, Stay With Me
Buy Yeah! on Amazon

Songs from the Sparkle Lounge
2008 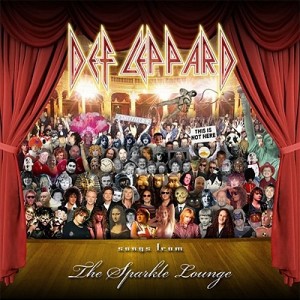 Okay, a new studio album, and the true fans are willing to see what these fellas have up their sleeve. The name itself was a huge turnoff, but we gave it a listen. The highlight? A song called Nine Lives which featured country singer Tim McGraw. Joe Elliot sings one of the lines in the song is “Have you lost your touch?” Yes Def Leppard, you have.

So, as you can see, like many other bands, Def Leppard peaked, then went downhill. But more importantly, we need to decide, once and for all, if this band, ultimately, is cool. My vote is yes, despite some displeasure. After all, Fonzie is cool, but he was the one who literally jumped the shark which coined the phrase. So, it’s now up to you, the loyal Gunaxin audience, to decide.