Is it the Hamm’s Bear?

Apparently when Yogi get’s him the beer shakes, all it takes is a trip to Jellystone’s local quick mart. 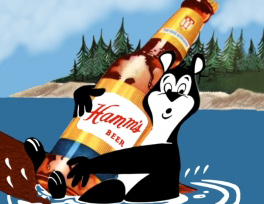 If you’re of a certain age, you may remember the Hamm’s Beer bear, an iconic cartoon that advertised the St. Paul brewery. A real–life beer bear caused a stir at a Hayward grocery store Thursday. The 125–pound black bear wandered into the Marketplace Foods atrium, and headed into the liquor department.

Here we see the bruin attempting to decide which twelver is better for his simple purposes of a quick chug before raping the park of its pic-a-nic baskets. But being the bear he is, he just can’t stop at the ice cold Pabst, he needs to get him some munchies before the panic attacks set in. The store’s security camera catches this ursine alcoholic red-pawed. And that, folks, is all the bear puns I’ve got. Get ya some, Bear!

Oh, and just in case you assume this is the first bear to infiltrate our safe zones, here is one that loves Subway!