Sports > Football > Is Plaxico Burress Worth Discussing? Not Yet

Is Plaxico Burress Worth Discussing? Not Yet 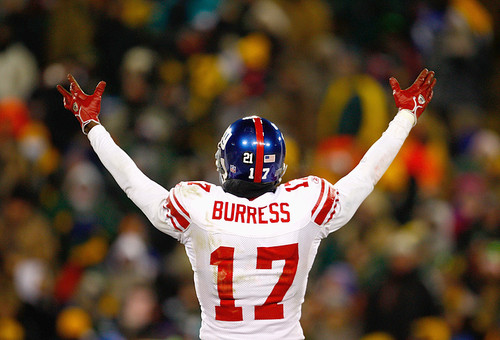 Let's wait before going down this road.

Speculating over player movement or trades is one thing, but constant speculating over where a receiver that is currently incarcerated will land is a bit much – even for the most hardcore sports fan. Burress still has somewhere in the neighborhood of five months left in prison, and then will have to go through the process of being reinstated before we can even have this discussion of who the troubled receiver will play for next.

A recent article in the New York Daily News sums up what should be the shared view of the league concerning Burress – worry about it when it gets here.

As previously mentioned he still has plenty of time left on his sentence. He then will have to get reinstated which means, at best, we could see him return to the NFL in two years.

These facts alone should quiet the speculating as he won’t even be a relevant topic anytime in the foreseeable future.

However, if that isn’t enough to sway your need to discuss Plax, maybe the fact he has been out of football and is only getting older will be enough to do it. Based on the current projections for when he will be reinstated, Plax will already be 34-years-old and will have a couple years of rust to work through upon making his return. We doubt he’s been running many routes while in prison, so it might take a considerable amount of time to get back up to speed.

Granted, we saw Michael Vick make an unbelievable return to football after time off, but don’t be too quick to think it will happen again. Burress was a solid receiver but frankly doesn’t have the same amount of pure and raw talent of a Vick where he could make an impact immediately after his release.

Keep in mind that beyond the actual accidental shooting of himself that Plax was frequently at the center of disputes within the New York Giants’ organization. Whether it was a suspension for conduct issues or various fines, Burress was far from the perfect receiver and even further from being an ideal role model.

When he does eventually return to football, we’re sure some teams out there would be more than willing to take a chance on his services. That being said, we highly doubt the Giants will be one of them. Whatever team does take that leap will be undoubtedly questioned over how Burress will impact their younger talent – exactly the reason the Giants will probably avoid the receiver.

Regardless, this situation is one that just needs to go away until we get closer to Burress’ actual reinstatement. Speculating about where he will go, if the Giants will bring him back or what team will or won’t pursue him are pure wastes of time. We have no doubts he will find a home in football again, but let’s wait a couple years to discuss it.