Gadgets > Games > It Could Have Been Worse: Mortal Kombat

It Could Have Been Worse: Mortal Kombat

If you played video games in the nineties, you played Mortal Kombat. It didn’t matter if you actually liked it or not because, well, goddamn:

That’s the kind of violence that turns a seven year-old child to Satanism and it’s awesome. Can Mario freeze another human being alive before tearing their torso in two? Of course not, because Mario is a tremendous puss.  Eventually Mortal Kombat spawned a movie which is fondly remembered for having only one redeeming quality: Sonya Blade committing the act of murder with just her thighs.

Sadly, Mortal Kombat and its sequel would go down in history as being terrible films. However, they could have been much, much worse, as evidenced by the Mortal Kombat Live Tour, a stage show devised to advertise the first film. The tour managed to bring everything we loved about Mortal Kombat to the stage, sans the blood-lust, decapitations, fire balls, inexplicably strong uppercuts, laser eyes or anything else that would have made it even remotely interesting.

The segment starts off strong enough; Sub-Zero and Kabal are combating (kombating?) one another while techno blares through the sound system. True enough to the source material. It’s sort of odd that Sub-Zero never actually freezes his opponent but you’d have to be pretty unreasonable to expect amateur martial artists to practice sorcery in their down time. After a few more seconds of no one landing hits the whole thing ends with a war dance and a draw before Shang Tsung steps forward, sporting what  can only be assumed to be a bad wig or less-than super cut. 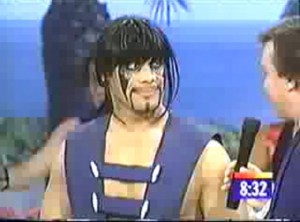 After introducing the cast the newscaster asks the most obvious question you can pose to a grown man pretending to be a Chinese wizard: what can children learn from this? This is the first real clue that maybe these people aren’t entirely sure what they are doing or why. When the subject of Mortal Kombat’s violence comes up Shang Tsung does everything he can to talk himself right out of a job. According to him, Mortal Kombat is full of positive messages for kids, helping them differentiate between “violence” and martial arts. Somehow the art of bloodsport helps children obtain their goals and overcome any situation that may come up in their daily lives. To illustrate this point, here’s an example of how Goro goes about solving his day-to-day problems:

Okay, so Shang Tsung is a terrible liar. Rather than punch the newscaster in the throat and haul ass out of there, he continues the painful charade, allowing it to accumulate into the most clumsy fifteen seconds of sexual harassment basic cable has ever known. Sonya Blade steps forward for another demonstration but before she can even speak the newscaster feels the need to comment on her stomach as though it were a common point of casual conversation. “That is the ultimate six pack of a stomach!” he opines, “That’s like an eight pack!” Sonya smiles, but if you watch closely enough you can actually see her rethinking every career decision she’s ever made up to that very moment.

The demonstration goes on without any trouble or pending restraining orders. Shang Tsung babbles on about codes in Mortal Kombat 3 and the station cuts to commercial, but not before the newscaster attempts to kill Sonya with what would appear to be jazz-hands. 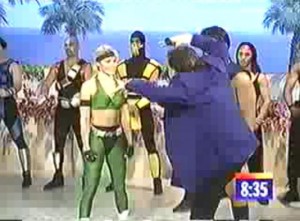 The promo ends far too soon and we’re left only to speculate what could have been.  Could Mortal Kombat have been more terrible than it already was? We like to think “yes, very yes,” and we’re pretty sure that wigged Shand Tsung would agree with us if he weren’t silently sobbing a Stuckys restroom right now. It just goes to show you that no matter how bad an actor’s performance may be or how poorly a script may have been written, there will always be a group of people clad in fake armor and spandex whose mere presence can make it seem like “Citizen Kane” in comparison.