Gadgets > Games > It Could Have Been Worse: Street Fighter

It Could Have Been Worse: Street Fighter

If you ever set foot in an arcade in the nineties then you remember Street Fighter. Not only did it help popularize the fighting game genre but it also managed to revive Soviet patriotism abroad.

The series gained mainstream popularity with Street Fighter 2, warranting several more Street Fighter 2s and a major motion picture. Sadly, Street Fighter: The Movie tends to be remembered as being “kind of okay, I guess,” by fans and the general movie going public alike. Though that’s still a lot more than anyone can say for Mortal Kombat: The Movie, it’s still not a very good representation of the franchise and most of the cast will admit to that. Even lead actor Rual Julia skipped out on the film’s premier, choosing instead to no longer be alive. 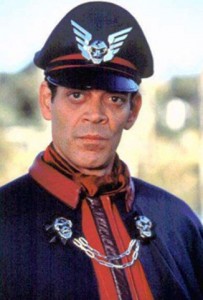 Still, it could have been worse, as made terribly apparent by the Hong Kong action film City Hunter. Released in 1993 and starring Jackie Chan, City Hunter is notable for not at all being related to Street Fighter  but incorporating it into a fight scene anyway with questionable results. There’s no need for any further context because, well, just watch:

The clip starts in standard Jackie Chan fashion with him and his sidekicks being beaten within an inch of their lives. The fight ends rather quickly when Chan is thrown into an arcade machine, triggering a spectacle of lights and sound that would slay a normal man. Rather then end right there and have the remainder of the movie be soft music with a tasteful photograph of the deceased, Chan somehow survives, only to hallucinate that his opponent is now the blond and handsome fighter Ken. Chan is once again promptly struck down, causing him to stumble into a Street Fighter 2 machine. Faced with certain death, he makes the logical decision of selecting E. Honde instead of maybe calling for help. 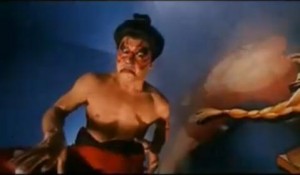 Fun Fact #1: the character is actually “E. Honda.” However, Chan was a spokesperson for Mitsubishi at the time with Honda being a rival car manufacturer, hence the name change.

Fun Fact #2: You could have learned that by reading Wikipedia but it would have taken you longer. You’re welcome, internet.

Chan’s fragile mental state leads him to believe he has become the legendary sumo wrestler. Sadly, there is no fat suit but we are instead treated to the best special affects Hong Kong can buy. 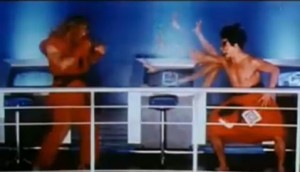 In any given frame of this sequence Jackie Chan has anywhere from five to nine arms on one side. Given that  Chan can kill two full grown Kodiaks with one hand, his opponent should be reduced to a pile of bear corpses in a matter of seconds. Despite this terrifying advantage he is promptly defeated yet again, this time by torpedoing skull first into a wall at top speed. Most fight enthusiasts would consider this a terrible strategy; they would be correct.

Again, logic would dictate that this is the end of the movie. Ken walks away victorious and Chan gets the runner-up prize of full-body paralysis. Instead he gets up and simply shrugs it off. A wise man once said “Quit while you’re ahead and not in a coma,” but do wise men get to star in Rush-Hour? I think we all know the answer to that.

While Chan takes a breather to readjust his spine and neck, his sidekicks regain consciousness and assume the role of two of Street Fighter’s most beloved heroes. 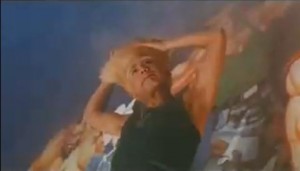 Somebody looked at this and honestly thought it was Guile. They spent hours with make-up, wigs and costumes, threw these pieces together in some sort of evil brew and cashed their pay check. What terrible vision impairment they suffered from at the time, we may never know. But what we do know is that we first saw this clip a month before writing this and we still see Guile’s sickly witch-doctor-esqe visage every time we close our eyes, haunting us like the screams of the damned. When we are awake we wish for sleep. When we sleep we pray for death.

Guile and Dhalsim put in their best effort for all of five seconds before being sent back to the child’s nightmare from which they were born. This brings us to the scene’s climactic ending as well as the highlight of all Asian cinema past, present and future. 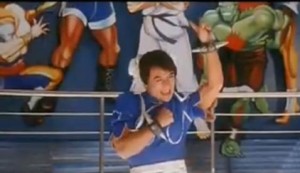 It’s been said that every actor, at some point or another, has a moment in their career that they deeply regret. In recent years Jackie Chan hasn’t always been known for the high quality work but no matter how terrible The Tuxedo is he must have had an easier time cashing that check knowing he didn’t have to dress up as a fictional Chinese woman and fanboy sex object to earn it. In a perfect world someone would wake him up every morning and promptly show him this picture as a grim reminder of how far a star can truly fall.

Chan rises above, striking down his foe with the awesome power of his suddenly well toned legs. His sidekicks unplug the arcade machine that started this downward spiral, ending the charade and returning our hero to his normal and bumbling self. The movie continues but there’s really no reason to keep watching; unless he gets power-bombed into a Donkey Kong machine and starts hitting gorillas with a sledgehammer there’s no possible way the movie could get any weirder.

Jackie Chan disowned City Hunter once it was released. If you’re wondering why, that clip gives him at least ten solid reasons before he ever puts on a dress. So the next time you’re watching Street Fighter and wondering why Guile has a Belgian accent, just remember that it could have been worse. 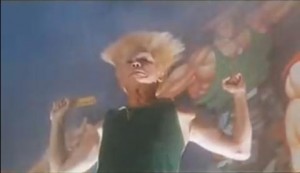 I AM A STRONG TYPE MAN