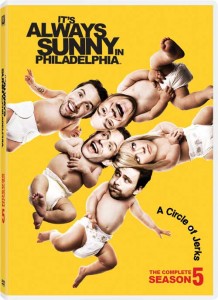 On Tuesday, September 14th you will be able to pick up the 5th Season of It’s Always Sunny in Philadelphia. The three-DVD set contains all the season’s episodes which aired on FX Network from September 17th, 2009 to December 10th, 2009. The whole gang is back and better than ever in one of the best seasons since the first. One of my favorite episodes is “The World Series Defense,” where the guys plead their case to a judge so they don’t have to pay the citations they collected during Game 5 of the World Series.

Another of my favorite episodes is “The Gang Wrestles for the Troops,” which guest stars wrestling legend Rowdy Roddy Piper. Jay, Mike and I were able to interview him for one of our podcast shows, and we had a blast talking with him about the show and how they were able to improvise the script.

Season 5 has great bonus features too, like the extended and uncensored scenes with alternative takes. Unused takes are fun because it’s interesting to see what the actors were thinking and what changes they made for each scene, and which take made the final cut for each episode. With a show and a cast like this, checking out the Blooper Reel is an absolute must. In addition, the DVD features the “Kittens Mittens Endless Loop,” “Season 5 Dream Sequence” and commentary on the shows with the cast and guest stars from the season.

You can pick up the DVD at the FX Shop or on Amazon. The new season will begin on September 16th at 10 PM on FX Network.