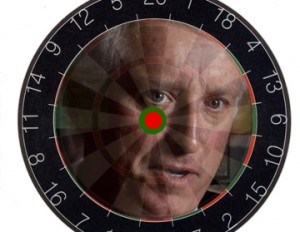 As I’m sure everyone has heard, Jack Thompson, a disbarred attorney from Florida, known for his ill-conceived crusade against violent video games, has recently filed a lawsuit against Facebook.com over a group called “I hate Jack Thompson.” Numerous posts within this group question Mr. Thompson’s intelligence, parentage, and sexual orientation. However, one Facebook user stated his intention to assault Jack Thompson with an Atari 2600.

Accusations of bestiality, deviant sexual behavior, and pedophilia, Mr. Thompson could take, but the threat of being assaulted with an obsolete video game console was too much. So he filed the suit against Facebook for the amount of 120 million dollars and even sent a legal form letter to one Facebook user’s High School.

Eventually the lawsuit was reported by 1up.com and dailytech.com among several other tech and entertainment oriented websites, and eventually found it’s way to FARK.

Membership in the “I hate Jack Thompson” group exploded.

On the day I read about the group from the FARK link, membership was around 1,500 Facebook users. in the weeks since the lawsuit was filed and reported, membership in the Facebook group has ballooned to over 3400 at the time of writing this article. Yeah. That’s more than double. (Good job, Douchebag.)

I doubt Mr. Thompson can claim sanity and actually believe he has a snowball’s chance in hell of winning this lawsuit. So that only leaves one obvious motivation for this legal action: Publicity.

I do not doubt that Jack Thompson believes to the core of his being that violent video games are a blight on the Cultural landscape of the world. After all if he didn’t, I doubt he would’ve filed so many baseless legal suits that it wound up costing him his career.

I would say his belief is ill-informed, many a well adjusted young man has whiled away his idle hours blasting pixilated foes to hell and back. I know I have, and I’ve actually fired a for-real gun with great accuracy on numerous occasions. I can tell you holding a video game controller, gunning down pretend victims, and firing a real gun at a paper target or an animal if one is hunting are NOTHING alike.

Most video game guns don’t even behave like their real-world counterparts. For instance, in Fallout 3, from Bethesda, The player is given a fictional model of a 10mm pistol, and with that little pop gun it may take as any as 12 rounds delivered to the head of your target to kill them. Now I’ve actually seen what a 10mm round will do to a cinder block. (Turn it into gravel, for the curious) So needless to say, I can safely assume that if someone was to fire 12 rounds from a real 10mm pistol into someone else’s head, you’d be wasting 11 rounds, because one would be more than enough to render them completely and totally dead.

Unless of course, your head is harder than a cinder block. (Test it out, we’ll wait.)

Well, that was stupid.

Despite all my experience with ‘murder-simulators’, as Mr. Thompson like to call them, AND real guns, never once have I had the impulse to go on a GTA type killing spree, while muttering “Boom, Headshot,” to myself in a strip mall, and neither have MILLIONS of young men and women that have played these games.

By that logic, Jack would have us assume that playing Guitar Hero would turn us into a rock star, and Call of Duty could be substituted for Basic Training for our Armed Forces. Want to be a star in the NFL? Go pick up a copy of Madden. Jack Thompson believes video games can turn otherwise sane people into kill-crazy spree killers, so it might be able to turn your flabby, uncoordinated ass into a Pro Bowl Quarterback.

Let’s face it, if someone is so mentally bent that video game can trigger a violent rampage, they just needed a trigger anyway. Hell, they would wind up going on that killing spree even if the only video game they ever played was Pac-Man.

The young men and women that play these games can, in fact, tell the difference between fiction and reality.  This however brings me to the point of this entire little diatribe. 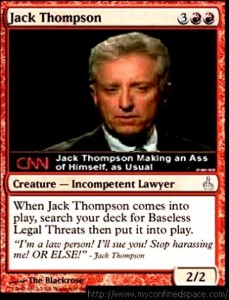 So, Mr. Thompson, you wanted publicity, you got it. So why don’t you do something good with your notoriety. I have a proposal for you: Every male in the English speaking world between 13 and 35 knows who you are, and would probably pay good money to see an Atari 2600 destroyed over your head. How about we track down the kid that made the original statement of his desire to smack Jack across the face with an Atari 2600? We’ll rent out an NFL sized stadium and sell tickets, fill the stadium. All proceeds to charity. Hell, you and the Atari guy can pick which one.

Jack, we’ll get you a football helmet, protective eye wear and a mouthpiece, and find the Atari guy an Atari 2600, stand you both on the 50 yard line, and let the Atari guy just whack you with it. And I mean really whack you with it. I want a plastic shattering impact. If you dropped like the bag of bricks you seem to be, it would be even better. We could probably auction your protective gear and the remains of the Atari for a pretty penny too.

Pay-per-view  simulcast across the internet worldwide. Could probably raise at the very least half a million for a good cause. What do you say, Jack? You ready to use your infamy for a good cause, or do you want your legacy to be that of a grandstanding twit?

You just let me know.