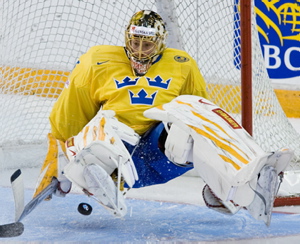 This is pretty obscure, unless you are a big fan of hockey, but Jacob Markstrom, goalie for Sweden’s World Junior Team, attracted a bit of negative attention on Monday night. We’ll let Puck Daddy introduce the video, cuz he uzes werds betur den we does.

“The last Swede to win Olympic gold in men’s platform diving was Erik Adlerz back in 1912. Based on his performance in the world junior championship loss on Monday night against Canada, Swedish goalie Jacob Markstrom may be his nation’s next great diving hope. Check out Jefflred’s hilarious “The Mighty Ducks”/Benny Hill-inspired remix of Markstrom’s dives from last night’s game:”