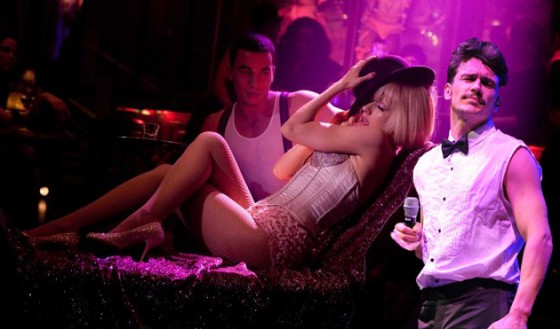 James Franco is quite the busy boy these days. He’s co-hosting the Oscars on Sunday night alongside Anne Hathaway, is nominated for a Best Actor statue for his performance in 127 Hours and just opened a Twitter account, which everyone should be following. Why, you ask? Because he posted a link to him belting out a tune from the Christina Aguilera abomination, Burlesque.

Now, I’m not a chick or gay, so I never saw the movie, but I imagine the song “You Haven’t Seen the Last of Me” sung by Cher sounded a little more coherent than Franco’s rendition.

Too bad this was pulled from the Oscars telecast. Watching a tone deaf Franco prance and sing would’ve added some quality douche chill moments to what promises to be a steaming turd of a show. Then again this is Franco we’re talking about. I’m sure he’ll come up with something that will make himself look like a complete and utter jackass. Hopefully.