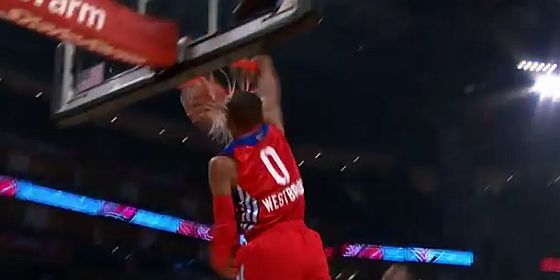 It was only a few months ago that James Harden and Russell Westbrook were teammates, playing second and third banana to Kevin Durant on the Oklahoma City Thunder. Thanks to Harden’s trade to Houston, the trio was separated for the 2012-2013 NBA season, but during Sunday’s All Star game they reunited in a big way for the West. In the closing minutes of the first quarter Harden spotted Westbrook breaking free from his man, and the two executed a perfect alley-oop to put the West up five.

While there were questions about Harden’s ability to succeed outside of OKC, the fourth year veteran has thrived with the Rockets in the first half of the season. Harden has increased his scoring by 10 points a game, while also seeing increases in his rebounds, assists and steals for a rebuilding Houston team.