Sports > Football > James Harrison vs. The Rest of The NFL

James Harrison vs. The Rest of The NFL 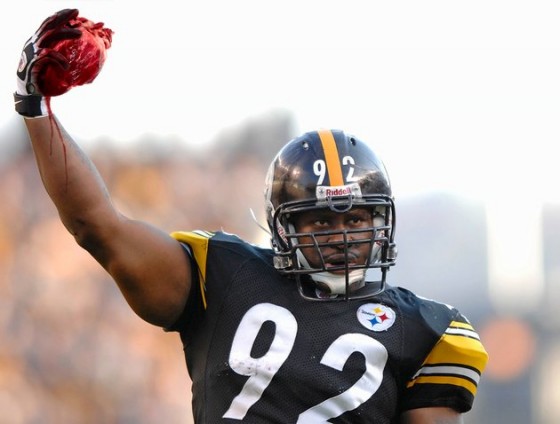 While most NFL players who are currently locked out are watching what they say, Pittsburgh Steelers linebacker James Harrison decided to let it all hang out as he did a recent interview with Men’s Journal where essentially he decided to rip on anyone within a 100 mile radius.

He called Texans linebacker Brian Cushing, “Juiced Out Of His Mind” and took shots at former New England Patriots, Rodney Harrison and Tedy Bruschi by calling them, “Clowns”. His Steelers teammates were not immune from criticism, Ben Roethlisberger was called the “Anti-Peyton Manning” and Harrison criticized his two interceptions in Super Bowl XLV. He blamed running-back Rashard Mendenhall for their Super Bowl loss as well after his fourth-quarter fumble possibly cost them the game. However most of the media’s desire were the words that Harrison slung at current NFL commissioner, Roger Goodell.

To put it lightly, here’s the recap of what Harrison told the reporter; He called Goodell “the devil and a crook”, hurled an anti-gay slur at him and mentioned that Godell should go start a flag football league due to the recent rule changes to the game. Harrison was also critical of some of the fines that he was levied last season. Harrison was fined over $100,000 last season for illegal hits and called into questions different fines, one was for hitting Drew Brees which cost him $25,000 and one when he hit Vince Young and was only levied a $5,000 fine. It’s not surprising that Harrison wants a pound of flesh from Goodell since he personally believed that he is ruining the game that he loves.

Since Harrison made those comments, he has backtracked in a rather interesting way. Instead of denying that he said those things, he came out and told the public that his words were twisted and he apologized for the gay slur that he used but instead of denying it, he apologized for the way he used it. Harrison might now be the most interesting man in the NFL at the moment and it’s not surprising that he decided to voice his opinion during a lockout. Were his comments out of line? They probably were. Should he have apologized? Of course he should. Should he be fined? No Doubt. Should he lose his career over it? Probably not.

There have been many athletes who have said some controversial and outright stupid things that were probably worse than what Harrison said in that article, most of them are still playing. While we all tend to focus on what individuals say, we tend to forget context and somewhat believe what Harrison is saying that his words were taken out of context. How are we supposed to know if Harrison’s rants were just a release of anger over his current situation? The NFL lockout has been tough on some players and I would put Harrison on that list, since he’s one of those athletes that lives and breathes the sport. He feels that it’s getting taken away from him and his anger can be matched by the thousands of people missing as well. There are probably at least a couple people who would have said the same things to Goodell and probably even worse. The lesson learned for James Harrison is next time it’s probably not the greatest idea to mention these things to a Men’s Journal writer who wants a juicy story.