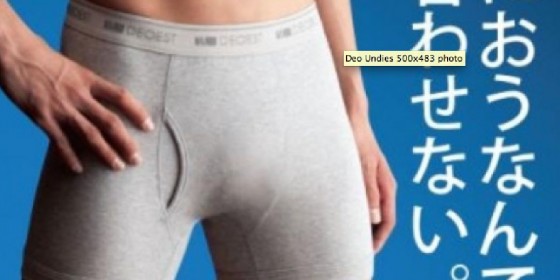 We can only hope that there is a team of mad scientists out there somewhere working day and night in hopes of ridding a man’s world of unfortunate shortcomings like small peckers, beer guts and male pattern baldness. In the meantime, while the fate of the average guy lingers in a quivering bardo of physical mediocrity and low self-esteem, the good news is, at least farts don’t have to stink anymore, as a Japanese company claims to have invented fart-proof underwear.

That’s right boys, no more silent but deadly odors permeating from the depths of your back crack. The people at Seiren say they have developed the first-ever deodorant underwear, which is powerful enough to extinguish even the most insidious flatulence.

“It took us a few years to develop the first deodorant pants that are comfortable enough to wear in daily life, but efficient in quickly eliminating strong smells,” said Seiren spokesperson Narni Yoshida. “At first we thought about selling them to those who require nursing care and to hospitals, but to our surprise, lots of ordinary people, [such as] businessmen who are in positions that require them to see people on a daily basis, bought them.”

In addition to fart-proofing underwear, Seiren has also developed a wide variety of other odor stopping products ranging from socks to shirts. Still, our biggest concern is that even though the underwear might be able to mask odor, there doesn’t appear to be a built-in silencer.