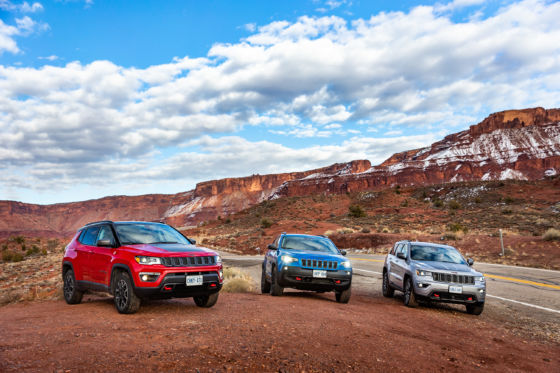 When one thinks of Moab, one usually thinks of Jeeps. From the Willy’s Overland models to the modern Fiat-Chrysler offerings, the Jeep brand has been present in Moab, Utah since the Jeep trail was invented. A surprise invitation to Moab had me joining a group of Canadians to traverse the Seven Mile Rim in various models of the Jeep Trailhawk brand. 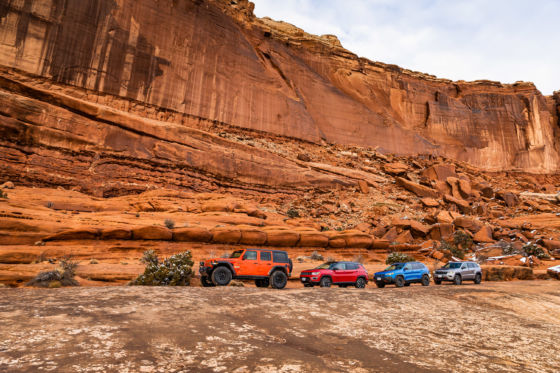 The usual thought of “Jeep” conjures up images of the iconic Wrangler; sometimes stock, usually heavily modified, climbing through the wilderness over rocks and streams in its natural element of hardcore off-road. Most of us wouldn’t think of a Jeep Grand Cherokee, Cherokee, or Compass model doing the same thing. Because by comparison, these crossover-styled models don’t have the ruggedness or persona of the Wrangler. 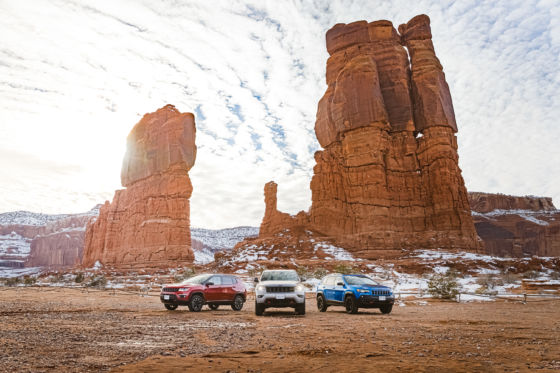 Yet each of those three models comes in a Trailhawk variant that is extremely capable off the pavement. Even in harsh environs like the winter trails around east central Utah. Moab is just south of Arches National Park, for which it is most well known for. The southern entrance to the park lies just west of town, across the Green River. Also nearby are Canyonlands National Park and Dead Horse Point State Park. 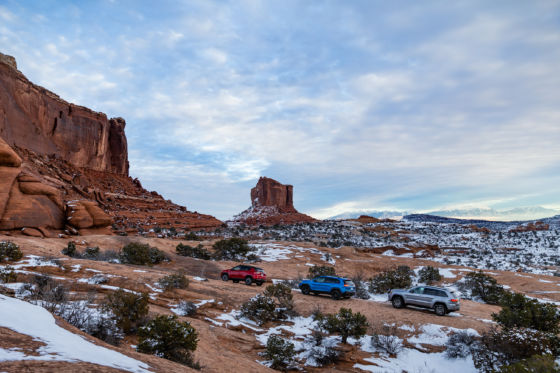 Somewhere in between Arches and Canyonlands lies state-owned land that houses a host of adventure trails for mountain bikes, off-road vehicles, and hikers. The Seven Mile Rim trail lies in that area. We learned that its name has nothing to do with the length of the drive and everything to do with the massive rock and hill formations that are viewed from within it. It’s a beautiful part of the world made even more so by the cold of a desert in the winter after an unusual amount of snow had fallen.

Getting There and Going Full Canuck 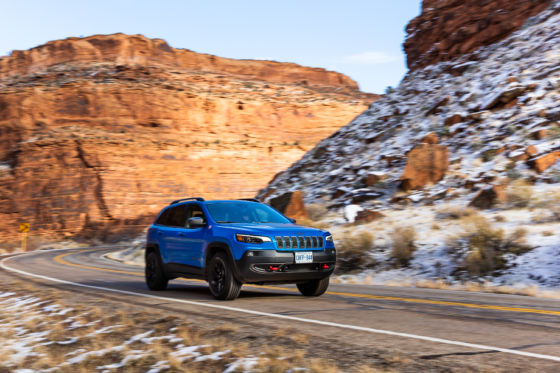 My trip to Moab began with the delivery of a 2019 Jeep Cherokee Trailhawk to my house in Cheyenne, Wyoming. I left early in the morning and drove into Colorado and across it to the state line with Utah. The Cherokee is surprisingly good as a highway drive for a road trip like this. Three pounds of beef jerky and five coffees later, I was in Moab pulling into the world famous Gonzo Inn. 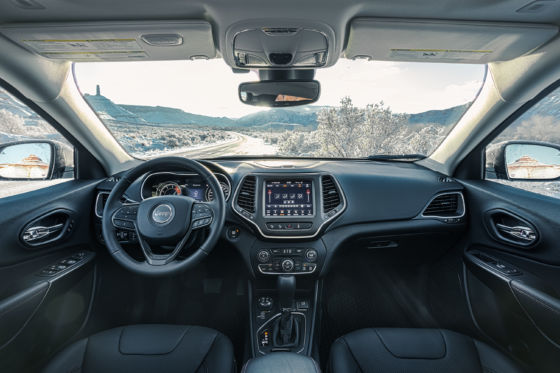 Present were a host of Canadians who’d come down for a winter drive in Utah alongside several representatives from Fiat Chrysler. Luckily, having seen the movie Strange Brew several times, I am fluent in their language and was able to blend the occasional “eh” and “take off” into the conversation naturally. I had earlier Googled the Vancouver Canucks so as to be fairly conversant in a “favorite” team when hockey inevitably came up in the conversation. I blended perfectly. 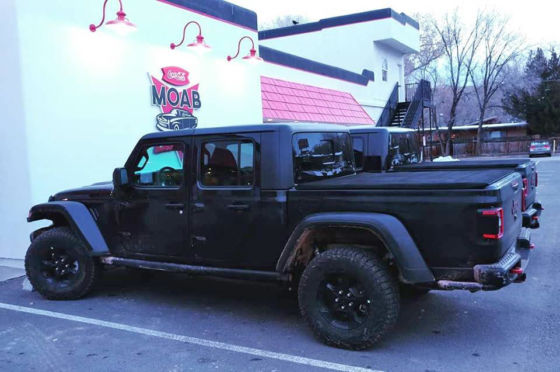 The next morning, we arose early and ate a lumberjack-sized breakfast at the also-famous Moab Diner, one of my favorite places to go when I was a regular in town. We then met our trail bosses for the day, got an itinerary for the drive, and were surprised when some test mules for the new Jeep Gladiator pickup truck arrived as they traveled overland towards Nevada.

Hitting 7 Mile Rim At a Run 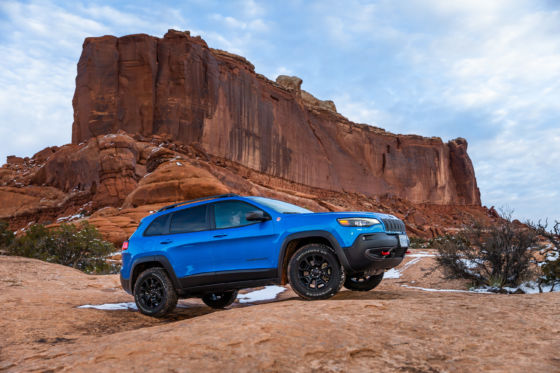 Out on the road, we got to the trail a few miles out of Moab and began our adventure onto Seven Mile Rim. The scenery around Moab is breathtaking with windswept buttes, pillars of stone, and sandstone recreations of castles and monoliths on every horizon. Along the trail, in between the rock bouncing and snow slinging, we witnessed the beauty around us. 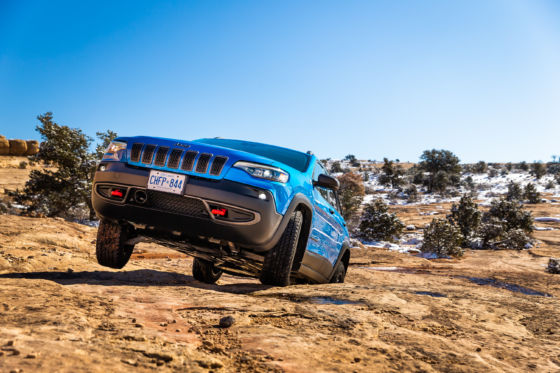 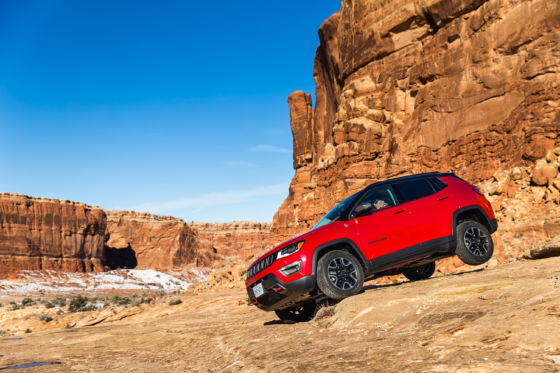 After the Cherokee Trailhawk, I switched over to a Compass Trailhawk, the smaller of the three Jeep models on our trek. The Compass is a good vehicle that’s a far cry from its namesake of the previous generation. Where the previous Compass seemed to focus on cost-effectiveness to the point of being cheap, this new one raises the bar for the compact crossover class with an excellent interior and strong practicality. 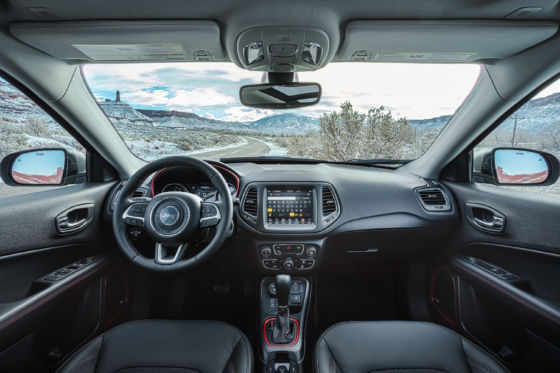 The Trailhawk model adds even more, cladding the Compass with 17-inch wheels, a raised suspension, and Jeep’s Selec-Terrain system and off-road-oriented Wrangler tires. A few other items familiar to the Trailhawk family, like red tow hooks, are also found. These add up to more off-pavement credibility than might be expected of the diminutive little Jeep Compass. 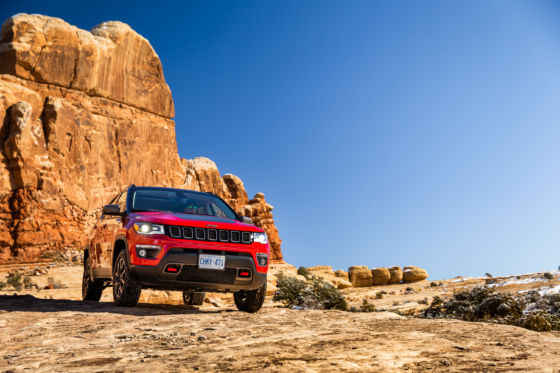 With the 2019 Compass Trailhawk, we learned that keeping track of where the wheels will hit the bumps and traverse the gaps in the trail is crucial to maximizing the small crossover’s capabilities. This pays off, though, with the Compass having the ability to get where others its size probably cannot. The small 2.4-liter four-cylinder engine outputs just enough to get there without breaking the bank and Jeep’s all-wheel drive system for the Compass Trailhawk offers good movement and grip if a steady throttle is used. 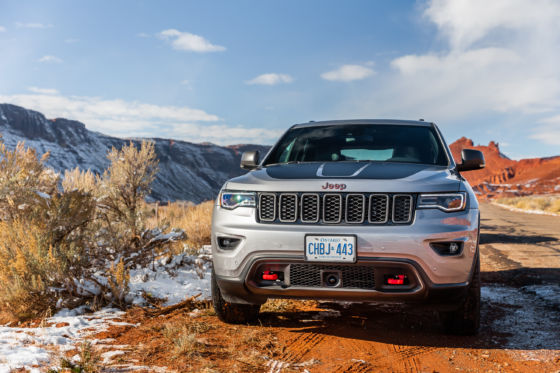 After the Compass, we tried the Jeep Grand Cherokee Trailhawk, which is far different than the Trackhawk and its 707 mad ponies or the Grand Cherokee SRT and its more manageable 475 horses. The Grand Cherokee Trailhawk focuses on off-road capability and is one of the most capable Jeep vehicles outside of the Wrangler Rubicon. The Trailhawk package adds the usual exterior styling flourishes expected of the trim plate, but also adds low-range four-wheel drive (Jeep’s Quadra-Trac II system), an electronic locking rear differential, terrain selectable traction control, an adjustable air suspension (“Quadra-Lift”) and more. This is a seriously capable machine and of the three, it had the easiest time of it climbing over rocks and plowing through snow and mud. 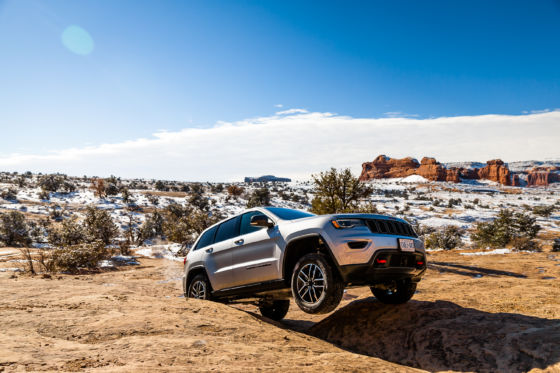 We had lunch on the top of the trail before heading back to Moab for dinner and much-needed sleep. The cold winters of the Utah desert are harsh, but it was well worth the drive to experience the off-road fun of Moab in the winter. Many thanks to Jeep for the opportunity and to the Canadian cohorts for whom the event was tailored for putting up with a dude from Wyoming. 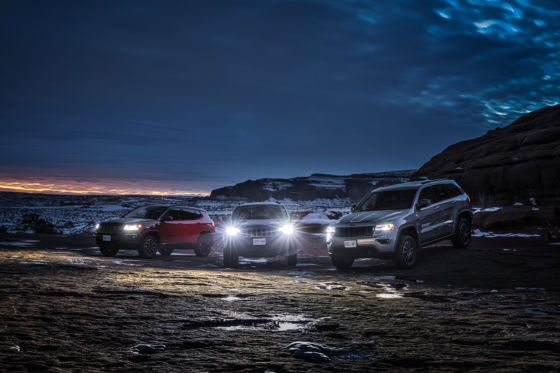