Jenn Sterger and the FSU Cowgirls 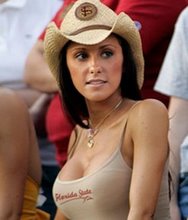 As previously promised when we took a look at Jenn Sterger as a USF Bull’s Fan, it is time to look at Jenn Sterger and her Florida State Cowgirl friends. Many know the story of how Jenn was discovered by ABC cameramen, and then highlighted by the words of Brent Musberger, and then went on to become an internet sensation. This site didn’t exist back then (2005), so we’ll admit we’re a bit late to the party. However we like to bring it strong, even if late. So to celebrate the big FSU victory over Wisconsin in the Champs Sports Bowl, we present Jenn Sterger and her Cowgirl friends.