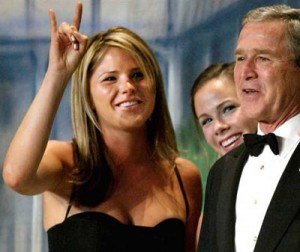 Obviously The Onion is a funny and creative site, but that title up above is beyond genius, and absolutely hysterical. It appeared accompanied by a Photo of Jenna Bush in the Onion’s Photo collection of The Legacy of George Bush. That, to me, wins headline of the year. That is of course until I googled it, and found that this phrase has been used numerous times across the internet since Jenna first turned 18. Still funny as all hell, but I don’t think I can give the Onion full credit. Now, in case you need a better visual to go with the headline, try checking out the Jenna Bush Beaver Slip Photo. I wonder how long the secret service gag order extends. I’m sure they have some stories about Jenna they would love to share.