Jeremiah Weed unveiled a new line of strangely delicious whiskeys in the fall that are blended with hand-selected secret spices and natural flavors. Each variant is sure to bewilder and amaze as they take the stage as either a shot or mixed with cola. The 750 mL bottles are sold at a suggested retail price of $18.99 nationally and come in three curious flavors… 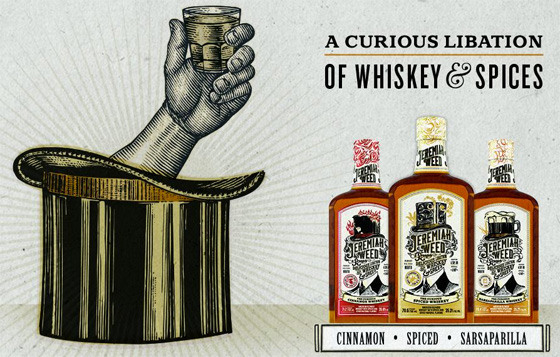 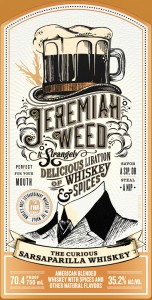 To help celebrate the launch of these new whiskeys, we’ve been invited to compete in a T-Shirt design challenge. Jeremiah Weed Whiskeys’ labels display a faceless man with intricate designs specific to each variant spiraling from his top hat. We’re particularly fond of both the taste and the design of the Sarsaparilla bottle, so we choose that label as the inspiration for our T-Shirt entry.

Through research on Jeremiah Weed’s Facebook and Twitter channels, we noticed that the brand’s design language is quite strong, and utilized consistently. So rather than create something completely new, we preferred to work with the elements that already exist when constructing our T-Shirt design. Essentially what we’ve done is deconstruct the Sarsaparilla label and pull out our favorite elements to feature more prominently on a T-Shirt. 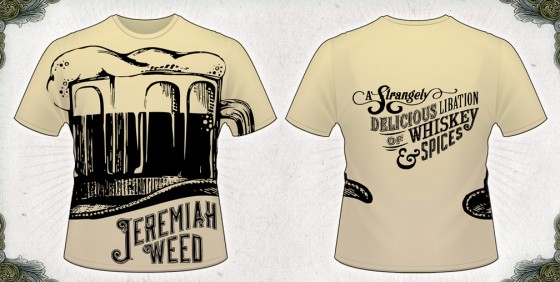 That top hat illustrated as a mug overflowing with sudsy sarsaparilla is just too perfect not to feature more prominently. So we blew that element up to ridiculous proportions and made it the centerpiece of our T-Shirt, even wrapping the brim of the hat around the sides of the shirt on to the back side. From there we selected the iconic logo and tagline and gave them more prominence by eliminating all of the other textures and intricacies from the design. We kept these graphics a simple solid black on a t-shirt colored with a subtle gradient of shades from the original label. Our simplified design is both strangely new, yet curiously reminiscent of the original Jeremiah Weed label.

We can’t wait to see what the other competitors come up with for their design. Ultimately if we’re selected the winner, we’ll be awarded a large supply of our shirts to share with our audience. So check back on Gunaxin soon to see if we’re victorious, and for your chance to win one of our strangely delicious shirts!