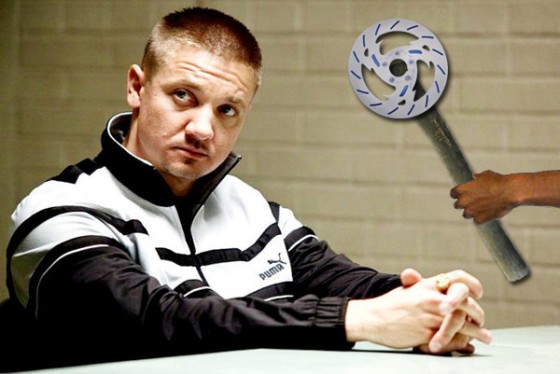 There’s a reason why I will never travel to Thailand but I can’t recall what it is. Threat of of a Tsunami? No. High concentration of foreign pedophiles? Nah. Too humid? Nope. Ah, now I remember. I don’t want to get sliced open by a homemade ax. And neither does actor Jeremy Renner.

The Mission: Impossible—Ghost Protocolstar nearly found himself in the middle of a brutal bar brawl when six staffers of the resort town’s Rachada Pub attacked his party, with one of the attackers horrifically wielding a homemade rotor ax during the fight.

It’s like my Uncle Roger always used to say, “It’s all fun and games until someone starts swinging around a homemade rotor ax.”

According to the Phuket Gazette, the 31-year-old actor was traveling in a party of six: in addition to another man and two women, he was also accompanied by a driver and the general manager of the Sri Panwa Resort, Vorasit Issara.

The fight reportedly broke out around 4:30 a.m. after Issara dropped a glass on the floor of the pub, the third they had visited that night. No further details were provided, including any other events or altercations that led to the fight, but the action was reportedly preceded by a verbal argument and ultimately caused a brawl to break out, leading six pub employees—ranging in age from 18 to 33—to rush the party.

Let me guess, someone in bare feet stepped in the broken glass. Whatever the catalyst, the end results are nothing to laugh at (unless you’re the Devil’s spawn).

Issara was most critically injured in the fight, getting stabbed in the stomach by 26-year-old Suchart “Ball” Palae, as well as taking the ax to his neck by 18-year-old Nareubate “Ko” Tednok.

Does every thug in Thailand have a nickname or just the ones who enjoy eviscerating bar patrons with homemade weaponry? The good news is the human filth involved have been charged with attempted murder.

So, if you’re thinking Thailand would be a great destination for that next summer vacation, think again.