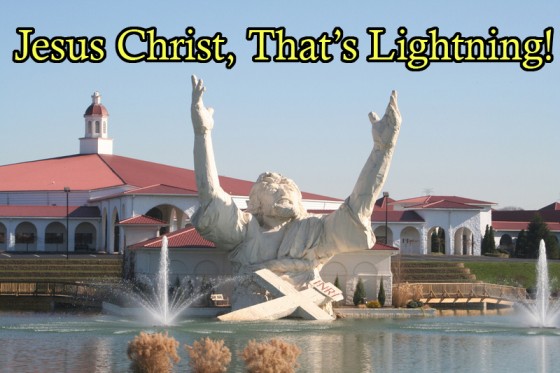 Before I even delve into this touchy topic, let me break the ground a little more softly here by having you listen to this by master comedic songster, Heywood Banks.

There. That was funny, wasn’t it? Yeah, well, by some incredible freak of nature (see: Wrath of God) this towering statue of the “Touchdown Jesus” was struck by a bolt of lightning and burned to the ground this past Monday. As in yesterday. So, is this a sign of things to come? Is the Lord just fed the ‘F’ up about the way we’re treating each other and the Earth itself? Dunno, but this very cataclysmic eradication of a very, potentially ‘graven’, image of the Son of God cannot bode well for the rest of us, can it? Here’s a clip from the full story from The Associated Press on Yahoo:

MONROE, Ohio – A six-story-tall statue of Jesus Christ with his arms raised along a highway was struck by lightning in a thunderstorm Monday night and burned to the ground, police said. The “King of Kings” statue, one of southwest Ohio’s most familiar landmarks, had stood since 2004 at the evangelical Solid Rock Church along Interstate 75 in Monroe, just north of Cincinnati. The lightning strike set the statue ablaze around 11:15 p.m., Monroe police dispatchers said. The sculpture, 62 feet tall and 40 feet wide at the base, showed Jesus from the torso up and was nicknamed Touchdown Jesus because of the way the arms were raised, similar to a referee signaling a touchdown. It was made of plastic foam and fiberglass over a steel frame, which is all that remained early Tuesday. 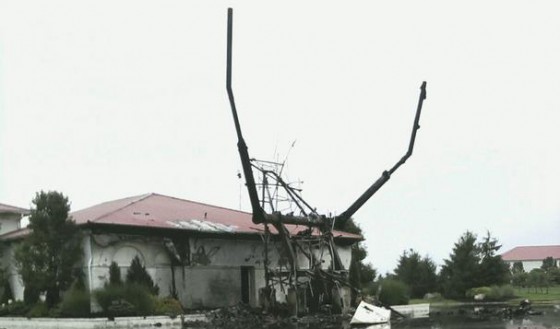 I don’t know about all of you, but repenting and begging forgiveness sounds about right. Sorry, I gotta find a church…