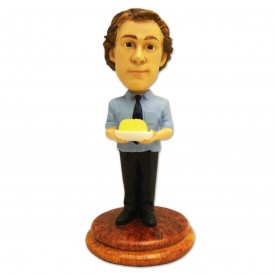 We made it incredibly clear in the article “Office Bobbleheads That Shouldn’t Be” that some members of NBC’s The Office do not deserve their own bobbleheads.

Well, the latest that shouldn’t be has finally come out – the Jim Halpert Bobblehead, which is limited quantities.

Our reaction: Jim Halpert does not deserve his own bobblehead. He is a likable character, the all-round good guy, but not particularly funny on his own and serves more as a character to root for (along with Pam) than to roll on the floor laughing over.

The only people who would actually buy this are likely collectors who resemble Kevin Malone in more ways than one.

Unless NBC decides to release an Erin, Joe, Jan, Holly or Gabe bobblehead, which would be ridiculous, our collection is now complete.