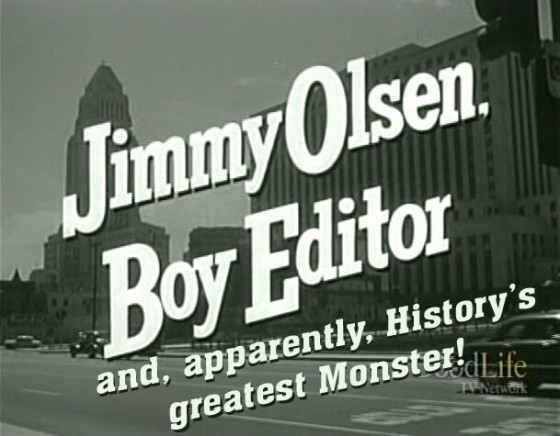 Lex Luthor. Doomsday. Zod. These are all names of tremendous evil, but they pale in comparison to a single man: Jimmy Olsen, ace photographer.

Between 1954 and 1974 Jimmy Olsen starred in his own comic series called Superman’s Pal Jimmy Olsen. Despite this upbeat title the series would prove beyond a shadow of a doubt that Jimmy Olsen is in fact the greatest super villain in American comics, as seen below.

One of the biggest signs that Jimmy Olsen is an evil mastermind. Through clever use of cardboard cutouts and bifocal lenses he’s able to crack the da Vinci code that is Superman’s identity. Ignoring that he’s a photographer for Metropolis’ biggest newspaper and that Superman’s existence is the only thing that actually keeps him in steady work, his choice to reveal him to the mob (which only consists of four people since Superman’s “Break Necks” initiative went full force) is questionable at best, but such is the nature of revenge.

Now here is an instance where Jimmy’s dickery isn’t as apparent. He somehow inherited an island and as its owner he’s well within his legal rights to defend it against men both average and super. However, given the fact that Superman’s pulled his ass out of the fire more times than a brick oven chef and that his island nation appears to only encompass forty feet of land at best, one has to wonder what he has in that straw hut that’s really worth defending to the death.

I’m not sure where Jimmy keeps finding all the murderous space rocks or why Superman has bothered to put up with this shit for seventy issues but I’m pretty sure at this point Jimmy Olsen’s stopped being his pal and is legally considered a super villain.

Kryptonite is a lot like Pokemon in that you’ve gotta catch ’em all and when Jimmy wasn’t ruling over his island nation with an iron fist, that’s exactly what he was doing. But silver Kryptonite was a hoax (at least this time) and Superman finally reconciled with his pal after this delightful prank.

You know you’ve gone off the deep end when Lex Luthor and Brainiac are the voice of reason. Also, I’m pretty sure Cosmic King is going to suffocate if he doesn’t connect that striking glass helmet of his to an oxygen tank as fast as possible.

I think at this point we can safely assume that Jimmy Olsen has some sort of psychological problem. He openly admits that he can’t justify revealing Superman’s identity to criminals (again) but has absolutely no problem with counting his dirty blood money in front of the man he just sentenced to death at the hands of those he tried to save. It’s kind of like the Bible if Jesus could deflect bullets and Judas had a thing for tacky bow ties.

To better make sense of these comics it helps if you understand that Jimmy Olsen has some sort of secret identity amnesia. At least a quarter of the two-hundred or so issues of Jimmy Olsen involve him learning Superman’s true identity, faking his death to learn said identity, revealing his identity or stumbling across Clark Kent’s bus pass. In fact, the issue before this one see’s Superman lock Jimmy up in an insane asylum because he pulled off the old cardboard cutout trick again and remembered who he actually is. This raises a few questions about this story:

2. If Superman can’t keep his identity from Jimmy for more than two minutes at a time, why doesn’t he just move to a different city?

3. What sort of unbalanced individual thinks he can solve all of his problems with a gamma weapon and how is he not on Death Row?

What sort of woman would choose Jimmy Olsen over a man who can throw a goddamned train? AN ENTIRE TRAIN.

Not only is Jimmy an incredible psychopath but apparently he’s a bit of a player, too. After he failed to break Superman’s heart by marrying Lois Lane he decided to simply marry every woman Clark Kent ever met on the off chance that one of these marriages would end his super career.

You laugh, but the man gets results.

I guess it’s understandable that Jimmy can best Superman in unarmed combat given his track record so far but I can’t for the life of me figure out how he managed to get the jump on Batman and not be rushed to the hospital with a broken jaw twenty seconds later. This would stand as the largest upset in Batman’s career until Bane, a man with the strength of two photo-journalists, would break his back decades later.

Finally, we have Jimmy collecting the tears of his alleged “pal.” It’s not until he’s endured one-hundred and twenty-five issues of betrayal at the hands of his best friend that he begins to question the merits of their friendship. Alas, it’s too late, and Jimmy’s evil plot has finally been realized. Lex Luthor tried everything he could to crush Superman’s spirit, but not once did he ever try forcing him to watch Lifetime movies and robbing him of his tears. Not only is that an act of evil, it’s flat-out creepy, too.