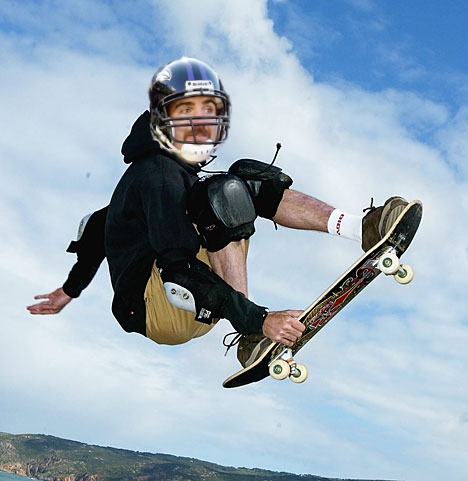 While getting ready for the AFC Championship Game against the New England Patriots, Ravens quarterback Joe Flacco has started up a new hobby, possibly to get his mind off of football for a day. What activity did Flacco discover? I’ll give you a hint: it’s totally tubular, brah.

“I’d never been on a skateboard in my life, so I was literally riding it about 10 feet down my driveway just to see if I could stand on it and stay upright,” Flacco explained Wednesday on NFL Total Access. “One of my neighbors must have called in looking for (Ravens general manager) Ozzie Newsome and left a voicemail on his secretary’s phone saying, ‘Hey, man, you got to let Joe Flacco know we’re trying to win the Super Bowl around here! He’s at home riding a skateboard. Somebody’s got to let him know what the deal is.’”

Flacco’s known as a guy who’s very close to his family, and there were stories that he still lived with his parents even after he became the starting QB for the Ravens, so when I think of Flacco skateboarding, I imagine this…

Scene – Joe Flacco in the driveway of his parents’ house with a skateboard, wearing cargo shorts and a Tool t-shirt.

JOE FLACCO: Just a sec, mom! I need to do a sweet trick before it gets dark.

(Flacco tries kickflip, kicks board into middle of street, truck runs over it)