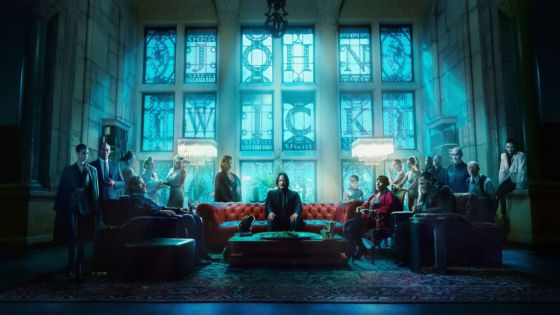 There’s a different substance to Keanu Reeves’ John Wick character. All of the vitality and humanity which has ever escaped the performance and definition of any American big-budget, swinging-dick action hero wound up bottled in Wick himself. This bottle has been smashed to shards, picked up, and used to puncture us with brutal force over the space of three films, with nary a sign of any mercy awaiting us as each film’s quality boosts itself over its predecessor. 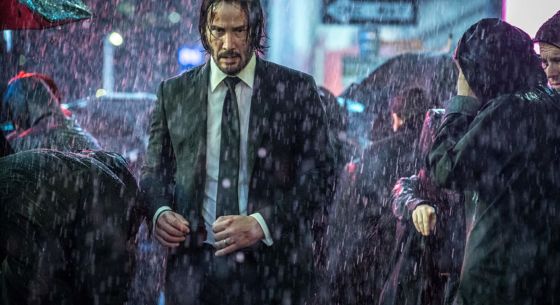 As the man with every gunsight trained at his back – and front, middle, and sides – Reeves once again steps coolly into his career-redefining role. (One dares never to look at him again as only a San Dimas slacker. Then again, in a year, we’ll have to look at him this way, but that’s another story.) He has singlehandedly changed the face of American action cinema by maintaining a ruthless commitment to his character and the physicality it entails. Every gamble he takes with his body pays off through some of the best fight and stunt choreography since Jackie Chan’s mid-’80s era. 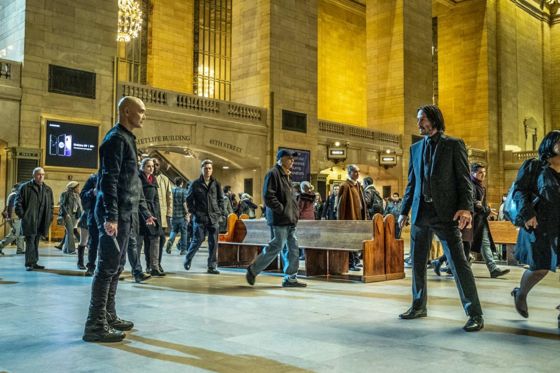 Now, he brings his hard work to bear on John Wick – Chapter 3: Parabellum, a film which chucks the rules of the first two out the window and makes them hit all the fire escapes and Dumpsters on the way down. It might even rival the amount of glass broken in Jackie Chan’s Police Story. There is absolutely no reprieve from the action and tension; this is simply a balls-out, go-for-broke game of “Let The Bodies Hit The Floor.” 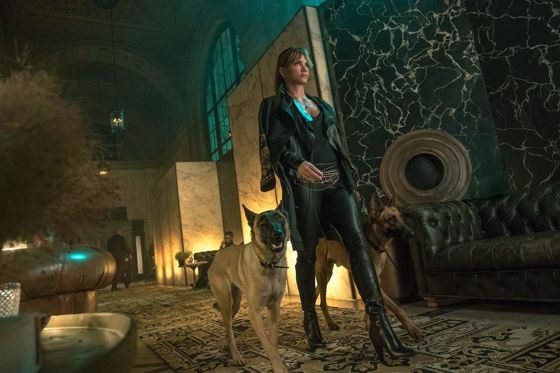 We’re in a place we’ve only partially been before, where Wick is being hunted by a gang of assassins. However, it’s the whole intercontinental assassin underworld against him this time, and everyone wants a piece of the $14,000,000 bounty the High Table has promised for his death. There’s barely any time to put a name and a face to the scores of men and women who get in his way, only to be met with brutality of the fiercest kind. 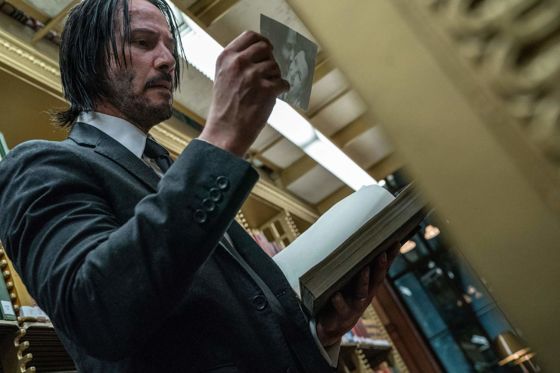 It’s a brutality which is also curiously cold and furious. A man of his stature cannot be possessed of emotion when facing off against those who seek to end him; he takes no glee in what he does, yet there’s a slight anger involved which Reeves puts across with an artisan’s skill. These aren’t the people who stole his car and beat his puppy (which his deceased wife gave him posthumously) to death a week or so ago in the film’s timeline. The time for revenge is over; the time to fight for his very life and soul is just beginning. 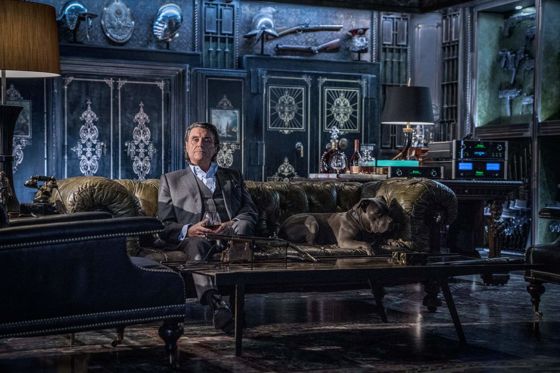 We pick up only minutes into the one-hour grace period Continental hotel manager Winston (Ian McShane) has given him, a courtesy he does not extend to most. In the first film, we witness the summary execution of someone foolish enough to break the Continental’s only inviolate rule: no business on Continental grounds. A safe haven for assassins, this hotel has served as the introduction to Wick’s mythical world of violence, where he and his peers move through our comparatively-vanilla world like ghosts, the bloodshed they wreak almost ignored by passersby and authority alike. It’s a seductive microcosm which series creator Derek Kolstad has fashioned, and we can’t help but fall prey to its charms and Old World-like customs. 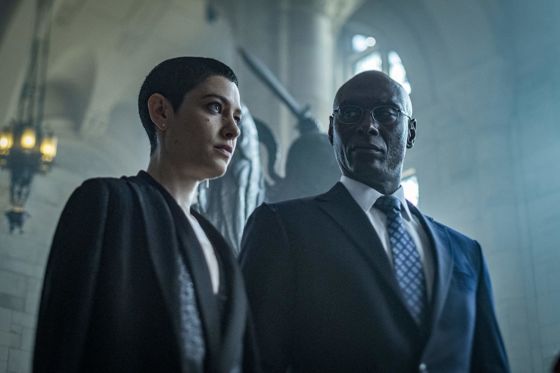 Religious imagery and terms add further subtext to this world upholding honor among killers. A forced attrition yields pierced hands similar to the Crucifixion, a symbol of which is pictured in the early goings almost as foreshadowing. The Continental itself is considered “consecrated” ground by its staff and clientele, and John has broken its single commandment. His actions from the last film have resulted in being declared excommunicado by Winston and the High Table, the organization only hinted at in preceding chapters. Another careful detail of this shadow leadership has been starkly disclosed to us via the presence of The Adjudicator (Asia Kate Dillon), sent by the High Table to give Winston – and anyone else with fealty to it, including The Bowery King (Laurence Fishburne) – one week to settle their affairs. This is no veiled threat; coming as it does from The Adjudicator, it’s a promise cemented in certainty. And The Adjudicator intends to keep this promise with every last one of the High Table’s resources a mere phone call away. 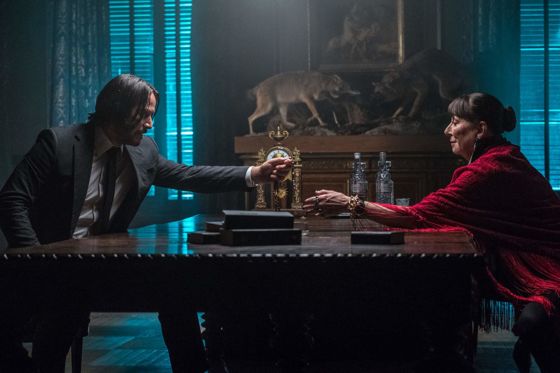 To give Wick any kind of protection or aid is to invite death into one’s house, as his onetime benefactor The Director (Anjelica Huston) says. However, Wick’s got a few chits to cash in, the process of which gives us scant glimpses into what makes him tick. Another one of these people he’s found owing him is his old friend Sofia (Halle Berry), the manager of the Continental Morocco whose past with Wick drops another small hint at the baggage weighing heavy on him. Regretfully, yet with honor and – let’s face it – barrels of blood spilled, these two provide him with chances to get out and live what remains of his life in relative peace. 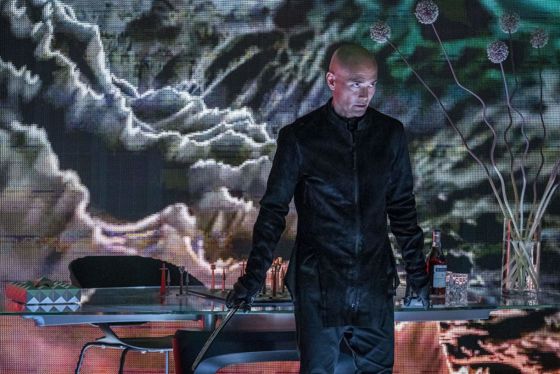 Yet, as Winston himself says: “Si vis pacem, para bellum.” Translated: “If you want peace, prepare for war.” And war it is, with The Adjudicator employing the only possible team to give Wick a guaranteed run for his money. Wick’s polar opposite, Zero (Mark Dacascos), takes a goofy pleasure in stalking and dispatching his victims, a trait which some members of his team share (we’re taking the time to point at The Raid‘s Yayan Ruhian and The Raid 2‘s Cecep Arif Rahman), giving us a small bit of comic relief before we’re plied with long, unbroken takes of pure action. 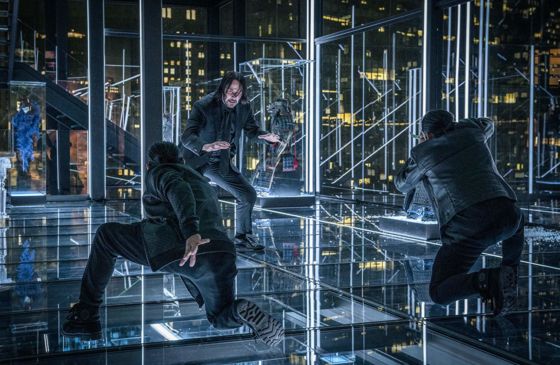 Stuntman-turned-director Chad Stahelski doesn’t let us shy away from the multiple arenas of hand-to-hand combat and tactical gunfights with hyper-edited, incoherent action. His background in stuntwork has given him and returning cinematographer Dan Laustsen a grand vision of how best to capture these fights with all the force and deliberation needed to knock us out of our seats. Their careful choices, demanding choreography, and Reeves’ extensive, documented training ensure we’re not cheesed with Texas Switch-style sleight-of-hand or stuntmen hiding their faces. 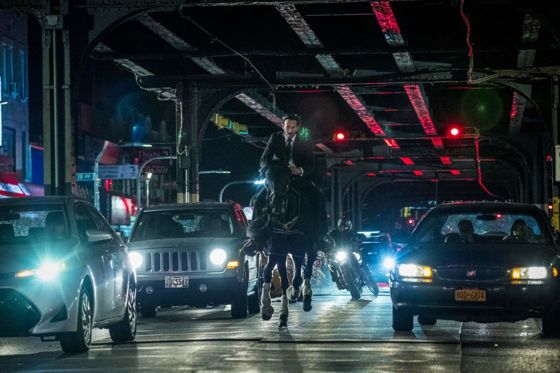 There are gunfights and bareknuckle matches. Horse-kicks – no, seriously, literal horses kicking – are used to devastating effect. Knives are thrown and embedded in heads, and swordfights are engaged atop speeding motorcycles. And hell, that’s just the first fifteen minutes. Stahelski and company can’t seem to stop trying to outdo themselves, raising the bar with each consecutive action set-piece and stunt until our collective breath is taken away by how deep Reeves and the actors have sunk themselves physically into their roles. 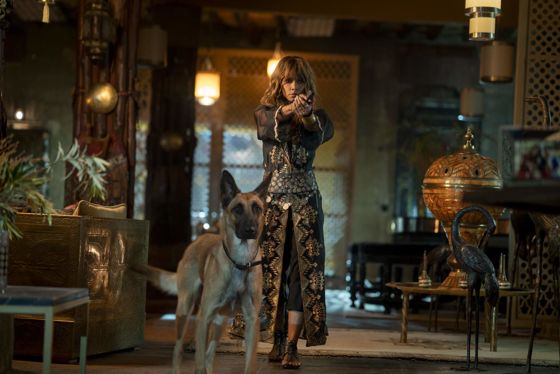 A few times, we catch Reeves maybe a half-step ahead of where he needs to be during a few fights; an early block or two reveals maybe a touch of carelessness or overrehearsing, but they’re tiny blips in retrospect. He carries and improves upon the mantle he’s set for himself with the last two films, making the audience gawp at his every move. Berry’s no slouch, either, holding her own right alongside Reeves in a massive, multilayered battle which rages from a balcony to the street. Her work is not to be side-saddled or dismissed; to see both of them gifted continuous shots showcasing their physical achievements is one of this movie’s delights. 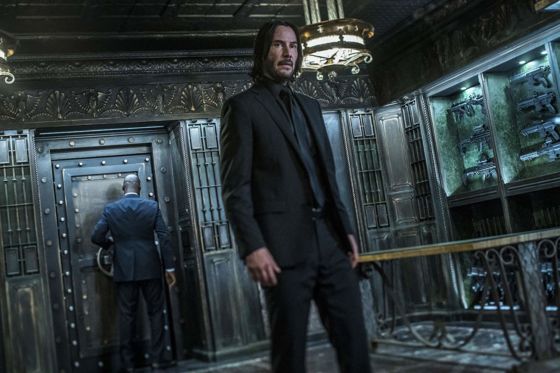 But it must come back to John Wick, an old soul wearied by the ravages of loss and death, unable to shake the specters hounding him since the day he picked up a weapon. Thus far, the films have followed the first three of the Kübler-Ross stages of grief. 2014’s John Wick dealt with his denial of self; 2017’s John Wick – Chapter 2 finds him giving into his frustration and acting out of anger; and now, John Wick – Chapter 3: Parabellum finds him trying to stave off the wolves at the door, willing to cut a deal for peace. Lest you forget, bargaining is not something easy to do in this milieu, where deals are usually cut with a flash of a gunbarrel and a broken neck. The word “parabellum” as translated above hints at preparations for war, not the war itself. If this exhilarating installment of John Wick’s continuing legend already feels like a one-man war against the world, the next film (which Chapter 3 more than hints at) might have to go into space to top it.

John Wick - Chapter 3: Parabellum chucks the rules of the first two out the window to make way for a balls-out game of "Let The Bodies Hit The Floor."