Sports > Fighting > Jon Fitch Cut From UFC: Why You Shouldn’t Be Shocked

Jon Fitch Cut From UFC: Why You Shouldn’t Be Shocked

Regarded as the 3rd best Welterweight of all time in the UFC, Jon Fitch has had his contract terminated after a string of sub-par performances. The once great Fitch lost via unanimous decision against the new and improved Demian Maia in Wembley, February 2nd.

Fitch’s heart within the cage has never been questioned in all the years he’s battled and bled in the UFC. However, as of late the UFC and President Dana White have been pushing for a more exciting and fast paced sport as the general population starts tuning in for the once denigrated “blood sport” events.

This isn’t a bad thing because we the audience want to be entertained in every fight. Whether that’s a spectacular knock out, a well worked transition from the guard into a pin-point choke, or an all out war like the one Shogun Rua and Dan Henderson waged at UFC 139.

With that, Jon Fitch was left in a precarious position ahead of his match with Demian Maia, considering ten of his last 11 fights had gone the distance and (other than his win against Erick Silva) had been widely considered ‘dull’. 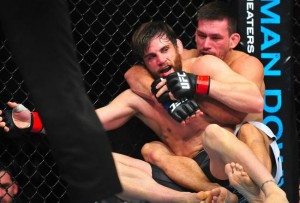 To recap, Jon Fitch lost the fight via decision and was subsequently canned. Sad? Yes. Unexpected? Not really.

Fans will argue the point that the UFC was unkind, giving him seemingly no chance to redeem himself. But the fact of the matter is that Fitch has been a stale fighter for a while with all the hype but none of the bite. Winning fights is great, but putting on a show is at this point more important.

On the other side of the coin, pro-wrestling is an outrageously popular and powerful machine, despite being a glorified pantomime. But, it’s entertaining as all hell and that’s why people pay to see it. No one wants to pay to see a guy hold another guy down for 15 minutes and meekly punch the dude’s arms and chest from the guard…

In my opinion, this is the reason Dan ‘The Outlaw’ Hardy wasn’t cut (from the UFC) following a 4-fight losing streak; he’s exciting and in every fight, win or lose, he puts on a show for the crowd. Then look what happens, he returns the favor to the UFC by winning his next two fights with aggression, flair and verve.

The UFC won’t turn into a WWE doppelgänger. The UFC is its own beast. We’re in the throes of its evolution, and we should welcome it. It’s harsh, but necessary for a better business.