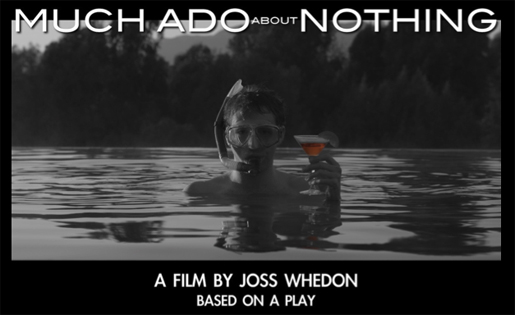 While filming next summer’s highly anticipated superhero extravaganza The Avengers, director Joss Whedon found time to shoot an adaptation of Shakespeare’s Much Ado About Nothing. At least that’s what the forwarded email I received says. Behold, a sarcastic press release!

Bellwether Pictures proudly announces the completion of principal photography on MUCH ADO ABOUT NOTHING, a modern version of Shakespeare’s classic comedy adapted and directed by Joss Whedon (Marvel’s upcoming THE AVENGERS, “Dr.Horrible’s Sing-Along Blog”). Filmed in just 12 days entirely on location in exotic Santa Monica, the film features a stellar cast of beloved (or soon to be beloved) actors – some of them veterans of Shakespearean theater, some completely new to the form. But all dedicated to the idea that this story bears retelling, that this dialogue is as fresh and intoxicating as any being written, and that the joy of working on a passion project surrounded by dear friends, admired colleagues and an atmosphere of unabashed rapture far outweighs their hilariously miniature paychecks.

A modern version of a Shakespeare play set in a beachside California city. Hmm… where have I seen that before? Get ready for plenty ‘o’ song and dance numbers.