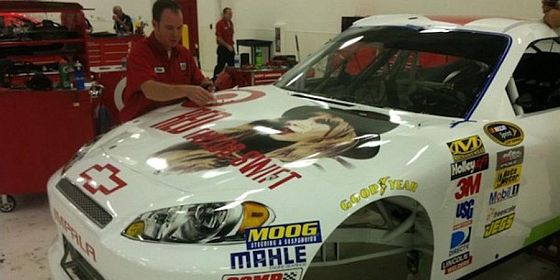 Juan Pablo Montoya’s tenure in NASCAR hasn’t gone as well as he had hoped, with only two wins in 212 career starts. The driver of the Target Sprint Cup car will be carrying a good luck charm this weekend, though, with top selling country artist Taylor Swift gracing his hood. As part of a deal to advertise her new album “Red”, available exclusively through Target, the Earnhardt-Ganassi-Sabates Racing #48 will feature a special red and white paint scheme with Swift’s image on it.

While Swift’s pseudo-country tunes should be a perfect fit for a NASCAR crowd, we aren’t sure if her girl-done-wrong songs are a great sponsor for a second tier driver like Montoya. We worry about him being overwhelmed with the desire to sing breakup songs over his radio every time he loses a draft partner, and fear what would happen if anyone dared to wreck him. NASCAR drivers are already an angst-y bunch, so piping in Taylor Swift music can only end badly. Only the plus side, there is always the chance that a Kayne-sponsored car cuts him off on the way to victory.

While “Red” is getting mixed reviews, the first song “We Are Never Ever Getting Back Together” has been a hit. We our doubts that it will match up with Darrell Waltrip singing “It’s A Fine Time To Leave Me Loose Wheel” during a race. Our real hope is that is doesn’t inspire the NASCAR on SPEED to create another video like this: