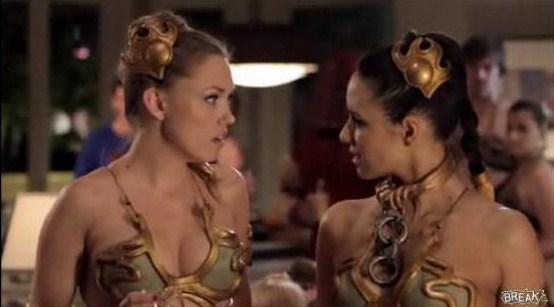 Those wacky folks over at Nerd Machine are up to their old tricks again. As part of the lead up to next week’s geekgasm known as the San Diego Comic-Con, the Machine have been rolling out a series of PSAs delivered by celebrities with a high approval rating among the nerd community.

Last week, Nathan Fillion of Firefly/Dr. Horrible’s Sing-Along Blog fame called attention to the horrors of swamp ass. This time around, the fetching Kaley Cuoco — star of the sitcom The Big Bang Theory — is speaking out against the thousands of geeky gals who feel compelled to dress as Slave Leia when attending science fiction and/or comic conventions.

Personally, I have no problem with a bevy of scantily clad Leias prancing to and fro, as long as they’re not fatties. Nevertheless, here’s Kaley looking oh so fine breaking down the do’s and don’ts of cosplay.