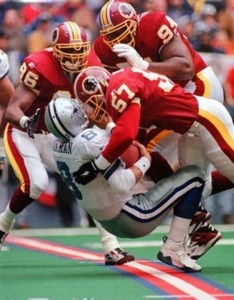 Ken Harvey is a former NFL outside linebacker for the Phoenix Cardinals and the Washington Redskins from 1988 to 1999. He played collegiality at the University of California, Berkeley and was selected by the Cardinals in the first round (twelfth overall) in the 1988 NFL Draft. Harvey was a four-time Pro Bowl selection from 1994 to 1997. In his career, he appeared in 164 games and recorded 89 sacks. Ken Harvey was our special guest for Episode #4 of The Gunaxin Show, and answered the Six Questions.

Ken’s current role is the Director of Responsibility for the Washington Redskins. Here is an explanation from the press release: 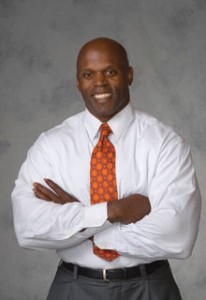 The Washington Redskins announced that Ken Harvey has been appointed Director of Responsibility, and will serve as a resource and advisor in the development of responsibility initiatives focused against education and advocacy. The former linebacker will also work with the Washington Redskins Charitable Foundation in bringing responsibility programs directly to the fans and the community at large.“After playing in the league for many years, I believe I have an excellent read on the demands players face on a daily basis from teammates, management, friends, family and business associates,” Harvey said.  “I think young people can benefit from that experience, especially young athletes.”

Harvey will also oversee the team’s “Responsibility is a Team Sport” initiative.  This initiative, with the support of long-time team sponsor and social responsibility advocate Diageo, is dedicated to the development and implementation of responsibility programs that address the team, players, and the community throughout the year.  These programs include Safe Drive Home designated driver events and Public Service Announcements aimed at furthering awareness and education on important issues such as responsible drinking. Diageo, the world’s leading premium drinks business with brands such as Johnnie Walker, Crown Royal and Smirnoff, has also made its global resources available to Harvey by offering him access to world-class independent professionals that will assist him as he works across the Redskins organization.

Harvey is involved in a variety of charity work with the Redskins and recently made a trip to Haiti to assist in the disaster relief :

The Washington Redskins and Director of Responsibility Ken Harvey joined with Diageo to deliver a second round of aid workers and of emergency supplies to Haiti. Redskins’ Owner Dan Snyder donated use of his private airplane for this effort. Harvey, accompanied by Diageo employee volunteers, departed for Haiti on Sunday morning with clothing donated by the team, along with relief personnel and supplies. They returned last night with incredible stories of the progress of relief efforts and their own impact.

Harvey has also worked with space tourists in a field of fitness training called Space Sportilization. The field combines football drills with athletic training needed to help prepare the body for exposure to low gravity environments. 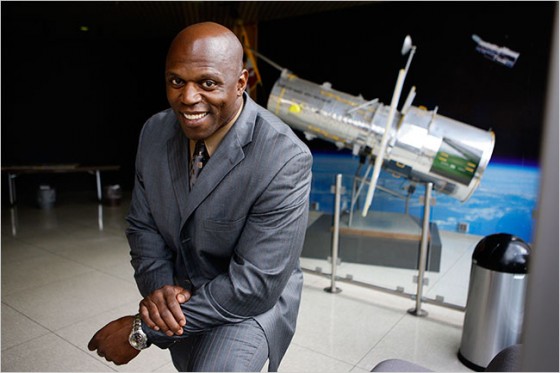