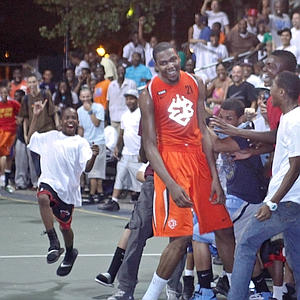 Are you feeling NBA withdrawal already? Well get used to it because unfortunately the lockout isn’t ending any time soon. However, here is a little video to tide you over. Kevin Durant was in Rucker Park on Monday night dropping a ho-hum 66 points in a single game. Check out the below footage of the final few minutes of the game where Durant hits four straight loooong three-point attempts and puts the crowd into a complete frenzy. I was worried for a second about his safety as he is completely mobbed after hitting the final three.