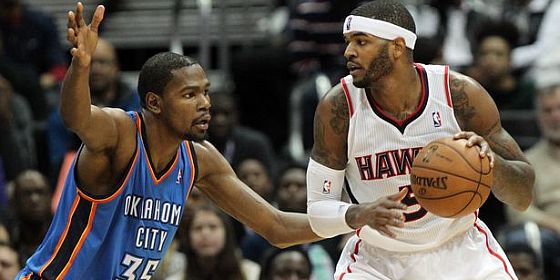 There is no question that Oklahoma City Thunder forward Kevin Durant is a great player. He’s paced the Thunder to a league-best 21-4 record, and a current 12 game winning streak. The 12th game in that streak came last night, against the Atlanta Hawks and Josh Smith. During one series in the second half Durant, an early MVP favorite, showed why he’s one of the best players in the league while matched up with Smith. On the defensive end Durant blocked Smith from getting off a shot down low three separate times, leading to a fast break where he finished and collected a foul (against the same Smith). It was a dominant 30 seconds of basketball that set the tone for the remained of the Thunders’ win.