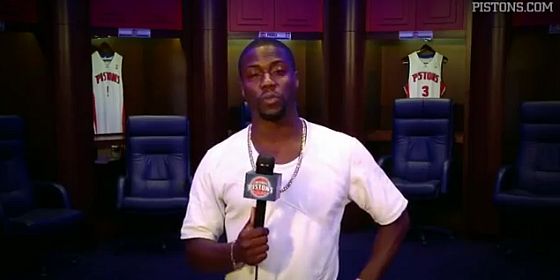 Kevin Hart is one of the biggest comedians working today, but he took some time off in Detroit to visit the Detroit Pistons. While in town for a show at the Palace at Auburn Hills Hart took part in a Pistons “Red Carpet” video, a series where they interview celebrities at the arena for games or other events. In the short interview Hart talked about his favorite player, short shorts and face masks.

Not satisfied with just answering questions, Hart took a turn as the questioner as well, interviewing Pistons’ small forward Austin Daye. Asking questions that sounded suspiciously like they were fed to him by his teammates, Hart grilled Daye primarily on his slender build.

Hart is hardly a basketball neophyte. He made headlines during the 2012 All Star Celebrity Game for being ejected for blowing up at a ref and stripping off his jersey, which of course netted him the MVP award.