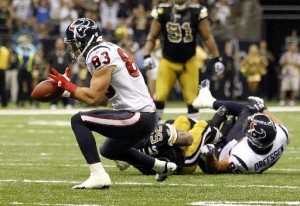 Sometimes the best highlights come unexpectedly. This is one of those cases. In the Houston-New Orleans game this past Sunday, Texans receiver Kevin Walter caught a pass for a touchdown with a combination of luck and awareness. It was mainly luck, though.

Let’s set the scene. Down 32-26 in the fourth quarter, Texans quarterback Matt Schaub needs to score in order to give his team the lead. He intends to pass it to tight end Joel Dreessen, who initially catches the ball. As the Saints defender knocks it out of Dreessen’s hands, it takes an unusual bounce, and another, and ANOTHER, until finally….

We’re only three weeks in, but it doesn’t seem like there will be many other catches even close to that this NFL season.