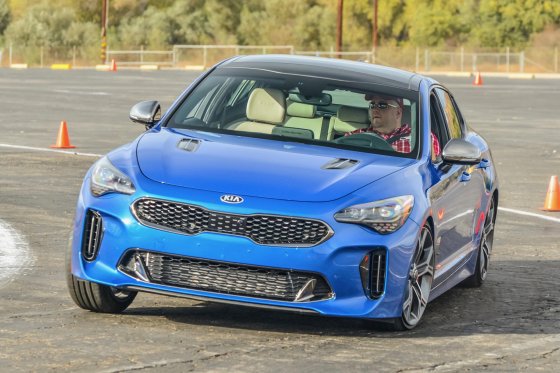 At the National Press Introduction in California, Kia took us to Walley World (Six Flags Magic Mountain) which was unfortunately closed. So they setup their own roller coaster autocross course in the parking lot for us to drive the new 2018 Kia Stinger GT versus some higher priced luxury competitors. Take a ride with us behind the wheel of the 365-hp twin-turbo V6 RWD Stinger GT as it handles the autocross course like a champ…

Autocross is essentially just a small track, and the Stinger’s performance in such a test is no happy accident. It comes from smart people putting in the work to develop a groundbreaking vehicle for the brand. Albert Biermann joined Kia in late 2014 as the head of Kia’s Vehicle Test and High Performance Development. His previous role was as the Vice President Engineering at BMW M Automobiles, where he was responsible for dynamics of those acclaimed road and race cars. With Biermann at the helm, Kia’s talented group of engineers perfected the Stinger on the Nürburgring Nordschleife. 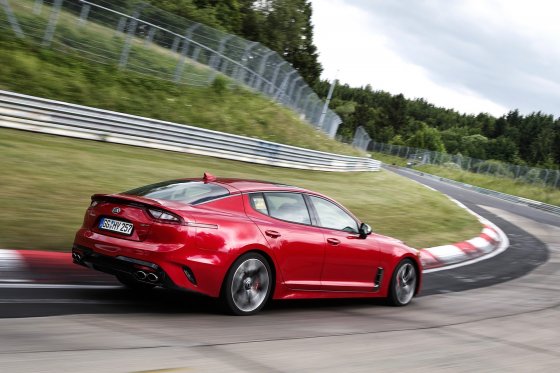 With 73 corners, nearly 1,000 feet of elevation and 17 percent gradients, the “Green Hell” can chew up and spit out a car of lesser mettle in just one lap. Kia’s engineers put every development Stinger through a minimum of 480 laps (equivalent to 6,214 miles) of high ­stress driving around the Nordschleife for quality, reliability and durability testing. The constant combination of hard acceleration, rapid deceleration, heavy cornering, changing surfaces and camber offers an unrivaled test of dynamic prowess and the distance covered during the Stinger’s development resulted in nearly 100,000 miles of on­ road testing.