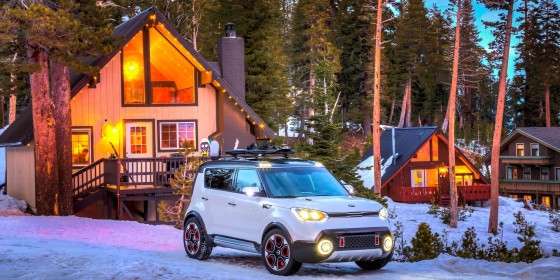 The new Kia Trail’ster concept was unveiled last week at the Chicago Auto Show, and was by far our favorite newly revealed vehicle. While it looks great in person, our photos from the Auto Show just can’t match seeing the Trail’ster in its natural habitat. So for this feature, we’ve chosen to exclusively use the fabulous photos from the press kit while wishing we could have been the guy driving it during the location shoot.

Ever since the Kia Soul was introduced, we have wanted to see it receive all-wheel-drive capability and more rugged styling. The regular Kia Soul is beloved by college kids, urban dwellers, and even grandmothers, but has never really appeared very tough. The original Soul concept was designed by Mike Torpey of the Kia Design Team in California, and we had the pleasure of sharing lunch with Torpey on Thursday to discuss his inspiration for the Soul and how the Trail’ster concept came to life this past year. 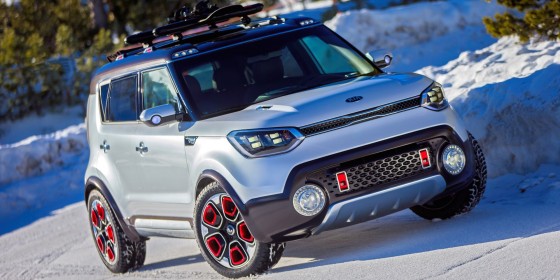 While on a trip to Korea to visit Kia Headquarters back in 2005, Mike became fascinated by a television documentary on wild boars, which are indigenous and important in Korean culture. Torpey sketched a caricature of a boar wearing a backpack, and that idea served as the basis for Soul’s signature shape, stance, strength and attitude. We joked with Torpey that over the years, the marketing team had turned his proud backpacking wild boar into a lovable dancing hamster. However now with the AWD Trail’ster concept, its obvious that the boar has returned with a new load of goodies in his backpack, and he’s ready to have an adventure.

“The Trail’ster concept is a near-future look at how the production Kia Soul would logically evolve into an AWD-capable version that’s built to escape the city streets and roam into the mountain wilderness,” said Tom Kearns, chief designer, Kia Design Center of America (KDCA).  “It takes the go-anywhere capability of an SUV and re-imagines it within a compact and sporty package with an expressive design to match.”

On the exterior, the Trail’ster includes the following noticeable upgrades :

The Trail’ster’s interior color and trim palette combines brown leather and aluminum accents for a stunning take on earthy but upscale. The style fits perfectly with the exterior of the Trail’ster and we were left drooling over what is possible when production costs don’t interfere with designer vision.

“We drew from high-quality active lifestyle accessories like snowboarding gloves, boots and helmets to bring a premium level of craftsmanship and character to the interior space,” commented Kearns. 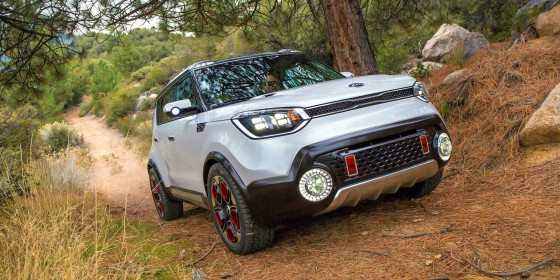 While the design elements are dramatic and look amazing, it’s the e-AWD technology in this concept that is most likely headed to a production vehicle in the near future. Adding an AWD capable model to the Soul lineup is a no-brainer, but the way the engineers accomplished that task required plenty of brain power. We’ll refer to the press-release for the technical details :

The Trail’ster is primarily powered by a robust 1.6-liter turbocharged 4-cylinder engine outputting 185 horsepower and 185 pound-feet of torque through a six-speed automatic transmission, matched to an electric all-wheel-drive system on the rear axle intended for low-speed assist, enhanced launch acceleration and improved traction in inclement weather or off-road situations. In addition, this approach helps mitigate turbo lag by providing instant torque. The system also improves fuel economy over standard all-wheel-drive setups by operating only when needed and serving as an energy recovery mechanism. 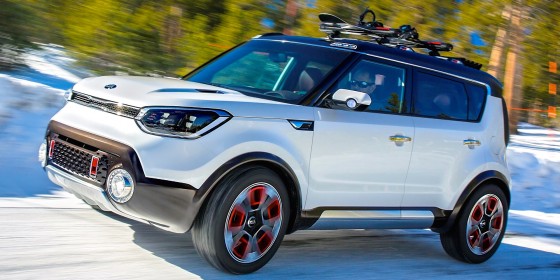 “This powertrain strategy of a downsized turbo and ‘Through-the-Road’ hybrid power yields a dual benefit of increased performance – torque and traction – and optimized efficiency,” said Kearns. “This is AWD being done the advanced, intelligent and responsible way, while sacrificing nothing.” Should the Trail’ster find its way to production, fuel economy would be targeted at a 25-30 percent improvement in city driving and 5-10 percent in highway driving over the normally aspirated 2015 2.0-liter gasoline Soul.

The Trail’ster’s electric propulsion system draws energy from a 1.2 kWh Lithium Ion Polymer battery powering a 27 kW, 270 volt AC synchronous permanent magnet electric motor outputting 35 horsepower and 100 pound-feet of torque to the rear wheels and bringing total output to an impressive 220 horses and 285 pound-feet of torque. To further improve fuel efficiency, the system also utilizes a Hybrid Starter Generator (HSG) to start/stop the engine as needed (and to feed energy to the high voltage battery), and an electrically driven A/C compressor, which can run when the engine is shut off. This technology is designed for easy, lightweight packaging, with the compact battery pack stored under the cargo floor. 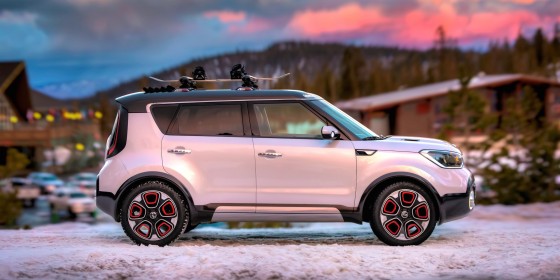 If you made it through those paragraphs explaining how this Trail’ster is ready to roam everywhere, you can clearly see that this isn’t just a cosmetic makeover of the Soul in order to get some press at an Auto Show. The technology in the Trail’ster is a proof of concept for a potential AWD Soul in the future, and we can only hope some of the rugged styling comes along for the ride. While the Trail’ster or its anticipated production version isn’t a direct competitor to the “trail-rated” Jeep Renegade, it could likely go up against the similarly capable AWD versions of the Renegade, Juke, Countryman, and others in the segment. We can’t wait for the chance to go on an adventure with this wild boar.