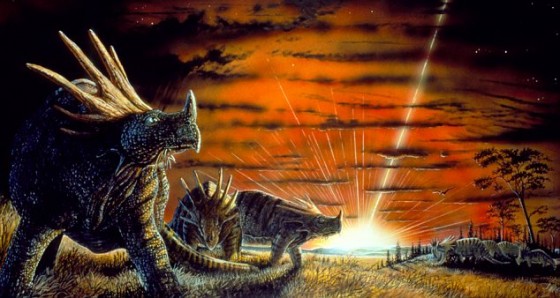 If ever there were a debate that tore asunder the very Earth creating a rift so vast that neither side could even see an iota of truth in the other, it would have to be Yankees vs. Red Sox. No, wait, that’s just for sports. But, if we’re talking about something even bigger; more violent and vicious, well then it would have to be ‘What Killed the Dinosaurs’. Now, I’m not going to take sides here. I believe what I believe but this is not the place to lay out my own personal opinions. This is hard-news journalism, and opinion has no place in such. That’s one of the first rules of journalism, in fact. It’s a bit like Fight Club with fewer beatings. Anyway, let’s cut to the chase and talk about what really brings this age-old argument to light. According to Reuters, this is what’s up:

LONDON (Reuters) – A giant asteroid smashing into Earth is the only plausible explanation for the extinction of the dinosaurs, a global scientific team said on Thursday, hoping to settle a row that has divided experts for decades.

A panel of 41 scientists from across the world reviewed 20 years’ worth of research to try to confirm the cause of the so-called Cretaceous-Tertiary (KT) extinction, which created a “hellish environment” around 65 million years ago and wiped out more than half of all species on the planet.
Scientific opinion was split over whether the extinction was caused by an asteroid or by volcanic activity in the Deccan Traps in what is now India, where there were a series of super volcanic eruptions that lasted around 1.5 million years.

The new study, conducted by scientists from Europe, the United States, Mexico, Canada and Japan and published in the journal Science, found that a 15-kilometre (9 miles) wide asteroid slamming into Earth at Chicxulub in what is now Mexico was the culprit.

Ya see? Wow. The article itself isn’t even the best part, you really have to follow this LINK and check out the 10 thousand comments. Yeah, TEN thousand. I’m telling you, this is a touchy subject. 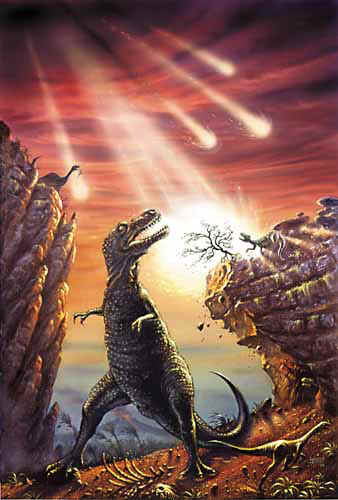 Honestly, I don’t really care what killed the Dinosaurs. It could have been something as stupid and far-fetched as weather anomaly that caused it to rain nothing but smoldering magma for a thousand years, and I still wouldn’t give a shit. The real point here is where the time line of the dino’s themselves fits into a Creationist and Evolutionist- shared history. The simple answer is: they can’t. True Creationists believe that the Earth itself is only something like ten-thousand years old. This in and of itself flies directly in the face of the Evolutionists (or, let’s just say Scientists) who agree that the Earth is something like 4 BILLION years old. Yeah, that’s a huge difference.

So, from what we know from the Bible, there were apparently Dinosaurs mentioned. Evidently the term ‘Leviathan’ refers to huge critters with ‘tree-trunk’ like legs. Well, this is up for debate but it is one way to shoehorn the beasts in an historical written text. So you can see here where things get twisted. Well, like I said, there’s no need to go any further into this pointlessly vicious circle. But, I will say, now that a shit load of scientists have finally figured this age old ‘who gives a shit’ out, maybe they can, oh, I don’t know, get on that Cancer curing thing. Nothing says misguided priorities than allowing a killer disease send more people up to Heaven. Ya know, where the dinosaurs are.

Want some more info on this unnecessary argument? Here ya go: