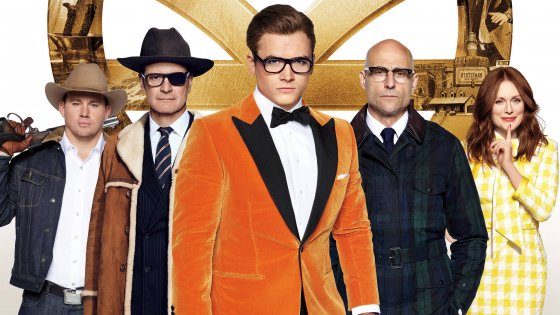 Kingsman: The Golden Circle picks up right where Kingsman: The Secret Service left off. Not as far as time elapsed between the stories each film tells, but in maintaining its avalanche-power momentum of crass humor, blinding action, and lovable spy-caper insanity. Madcap mayhem, in short.

This is James Bond with the genteel, PG/PG-13 shackles taken off. Innuendoes are dispensed with, blood flows copiously as headshots explode, bodies are ground into hamburger meat, and women offer themselves in the most prurient of ways. And yet, we’re still left agog at the balance between intensity, humor, and surprising humanity which returning helmsman Matthew Vaughn wields as effectively as the weapons the Kingsmen themselves use. 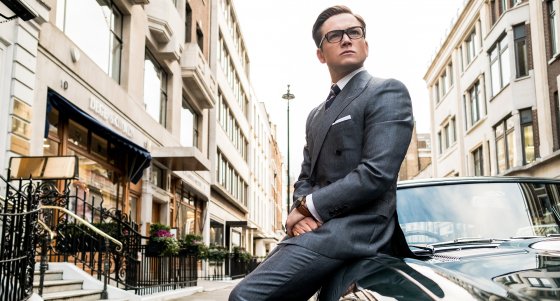 Underneath all of its crass and ostentatious ways lies a furiously-beating heart, the spirit of which is embodied by its rough-hewn hero, Gary “Eggsy” Unwin (Taron Egerton). As much as we love to believe the caper itself is the story, it’s Eggsy’s journey from insolent London chav to upstanding Kingsman to which we’ve been attached. The sweetness inherent in his character helps us deal with the ugliness which the Kingsmen have to battle mission after mission. 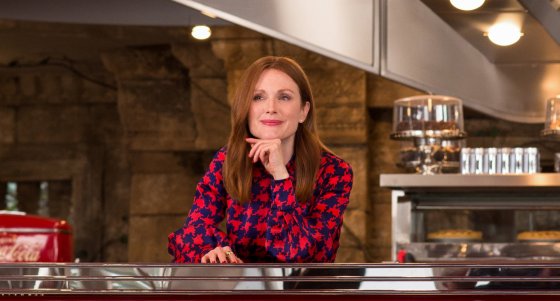 The mission this time? Stop another quirky villain, Poppy Adams (Julianne Moore) – the polar opposite of The Secret Service‘s lisp-saddled, violence-averse Richie Valentine (Samuel L. Jackson, appearing in archive footage). Nothing – and I mean nothing – spooks this lady, not even the horrifyingly disgusting fates she gives those who cross her. Moore revels in her role as a sweet-talking, June Cleaver-type woman living a 1950s domain of her own construction in an unknown jungle, from which she and her organization (the titular Golden Circle) distribute much of the world’s drug supply.

It’s the corruption of the normalcy of suburbia we’ve seen so much of late – PTA moms selling drugs on the side (as seen in Showtime’s “Weeds”), addicted to Valium (dubbed “housewife heroin” by author Christopher Moore), reading “Fifty Shades of Grey” – blown up to exaggerated proportions. (Not trying to shame here – the last item should explain my humor.) This theme of the subversion of suburban America – and Americana, as well – also carries over to the discovery of America’s version of the Kingsmen, the Statesmen. 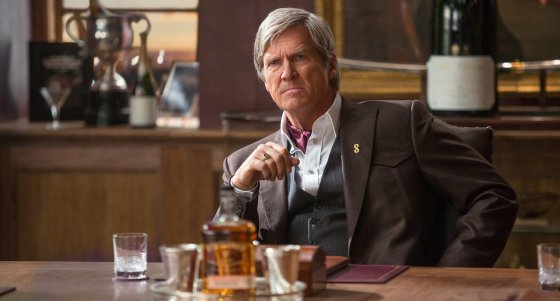 After all, what could be more American than the wholesomeness of a whiskey distillery in Kentucky? Firstly, it’s America’s heartland. Second, fans of the first film should prick up their ears at the mere mention of “Kentucky.” Statesman Whiskey, akin to the Kingsman tailor shop, provides the Statesmen their cover and funding, both of which they’re more than happy to grant Eggsy and Merlin (Mark Strong), the last two surviving Kingsmen. These two organizations have only a short time to stop The Golden Circle before their drugs kill every user on the planet. 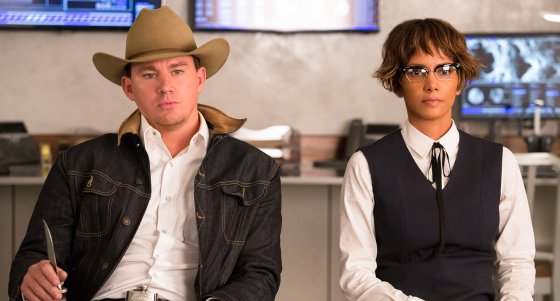 Similar to the last film, a large portion of the world’s population hangs in the balance, as Poppy’s drugs contain a deadly toxin for which she holds the antidote. An interesting posit is put forth here: what happens when the chance to win the “War on Drugs” means the death of every drug user on the planet? Never mind if they’re recreational users or medicinal; in one person’s mind in the film, they’re all druggies and don’t deserve salvation anyway. This theme is driven home in less of a subtle manner than Valentine’s overpopulation motive of the first film, and it’s not an easy one to stomach.

Vaughn and Jane Goldman’s script is peppered with constant surprises, keeping the pace flowing and the blood pumping through its 141 minutes. (There are no post-credits scenes, so you can leave right as the credits start rolling up.) That may seem like a long time, but thanks to Eddie Hamilton’s dynamic editing and the constant forward motion of the plot, it never feels like a two-hour-plus movie, such as a heavy action drama like The Dark Knight (although that film is amazing). 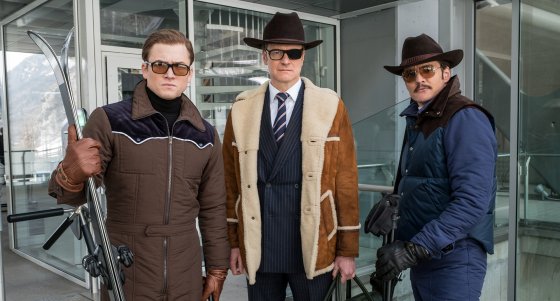 It’s a welcome continuation of the Kingsmen’s high-flying, dizzying antics, outrageous in its audacity and unwillingness to conform to convention. Kingsman: The Golden Circle once again strikes its fascinating tone of self-aware tomfoolery and deathly serious. This tone, to me, is nailed in a scene where someone, facing down an advancing squad of bad guys and the business end of a land mine, starts singing a well-known pop song fully backed by the film’s rising score. Fewer films aim for the heights which the Kingsman series has hit twice in a row. Kingsman: The Golden Circle is a rare sequel, hitting all the notes for which its predecessor was revered while punching a few new keys in a chorus of its own.

Hitting all the notes for which its predecessor was revered while punching a few new keys in a chorus of its own.