Media > Movies > Knight and Day on Blu-ray and DVD

Knight and Day on Blu-ray and DVD 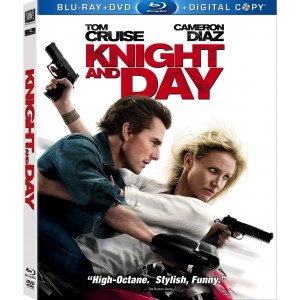 On November 30th you can pick up Knight and Day on Blu-ray and DVD. If you love the old Tom Cruise, like his role in Top Gun, then you are going to like this film. Cruise and Diaz make a great on-screen pair with their chemistry and the action mixes well with comedy.

The plot of the film begins with a small-town girl named June meeting a mysterious guy whom she thinks is the man of her dreams. But she soon discovers he’s a fugitive super-spy, who thrusts her into a thrilling cat-and-mouse chase that spans the globe. As the bullets and sparks fly, June must decide if her “Knight” in shining armor is a dangerous traitor or the love of her life.

The Blu-ray and DVD pack comes with three discs. The third disc is a digital copy for your laptop or PC. The bonus features includes, Wilder Knights and Crazier Days, Boston Days and Spanish Knights and Knight and “Someday”: Featuring the Black Eyed Peas and Tom Cruise. Also included are the viral videos, “Soccer” and “Kick.” You can win a copy by following us on Twitter, or purchase the DVD and Blu-ray combo pack at the Fox store or at Amazon.com for $39.99.