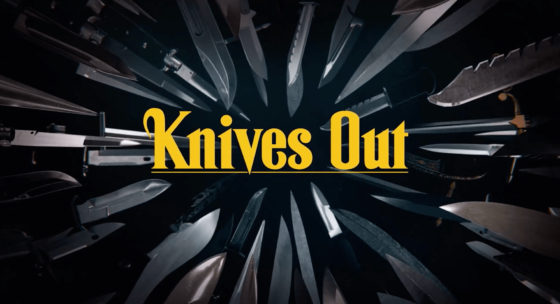 The following paragraph is a summary from the email sent to press: 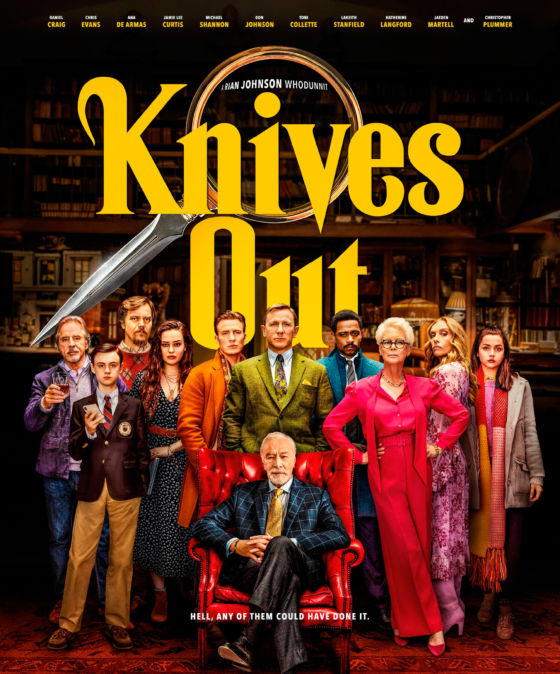 Plotwise, that’s all you need to know or should know going into this film. Knives Out is a mystery/comedy of the kind we haven’t seen since the Neil Simon-penned Murder by Death or Jonathan Lynn’s adaptation of the Parker Brothers board game Clue. Its surprises are better experienced than written about or told, and the labyrinthine paths it contains are sure to beguile and delight. Rian Johnson has not only knocked it out of the park, but he’s redefined his commitment to cinematic caper pleasure, so evident in all of his films. (Yes, even The Last Jedi.) 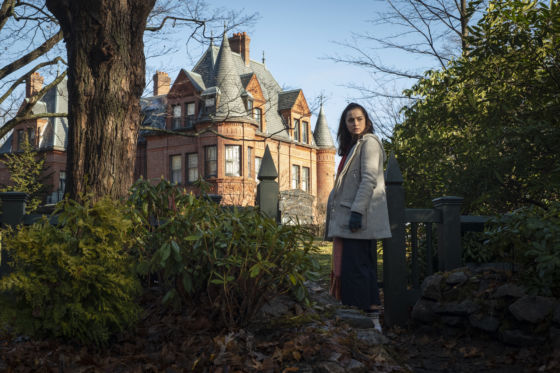 It starts from the first shot – a moody composition featuring a dark and foreboding house, a low-hanging mist, and dogs running in slow-motion. Right away, the tension is set, the atmosphere is established, and questions are starting to form in our minds. Driving the hooks in hard before the title is displayed is a particular trademark of Johnson’s original (read: non-Star Wars) work, where he defines his films with a short, expertly gripping sequence to land us in his clutches. And once this film has you, it doesn’t let go. 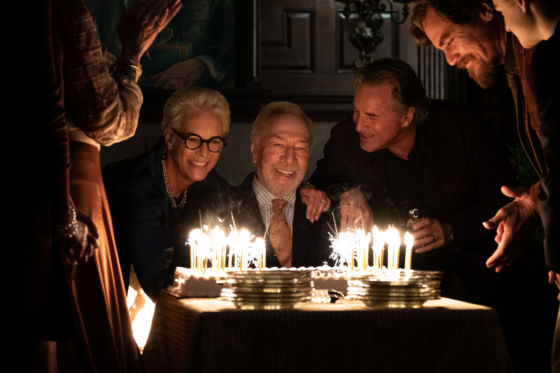 Thanks to Johnson’s careful plotting, we’re thrown straight into getting to know the Thrombey family and their associates following patriarch Harlan’s death, the process of which creates an air of suspense and humor. Backstories, motives, and truth among lies keep us hanging on every word and intimation issued forth from our players, which Johnson does easily through flipping and backflipping between multiple points of view of singular events. This high-wire balancing act of absolute clarity through subterfuge is an excellent feat, considering how convoluted some of the family members’ relationships are revealed to be. 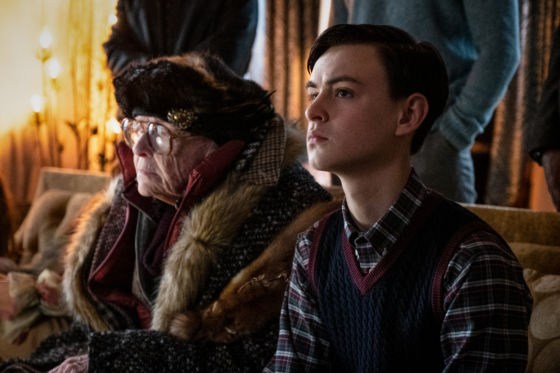 The film has layers upon layers of complexity without being confusing, submerging us deeper into the sordid details the investigation exposes. Each member has their own secrets, and you can almost see the screenplay grinning wickedly at us as we agonize over the missing pieces withheld. Through the initial interviews with police detective Eliot (LaKeith Stanfield), trooper Wagner (Noah Segan), and independent private investigator Blanc, we are acquainted with the film’s flashback structure, ruthlessly instrumental to its cunning reveals. 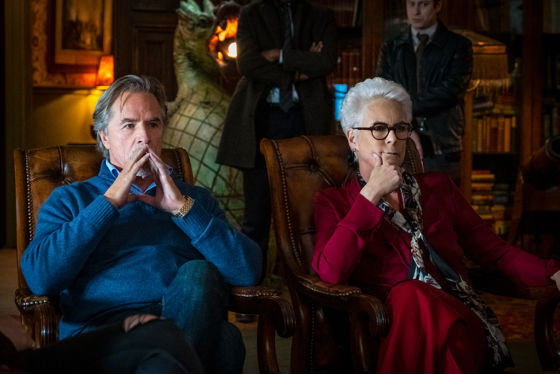 Knives Out‘s veritable cornucopia of Hollywood actors – both longtime and newcomer – also seems to be having the time of their lives running the gauntlet the script demands they run, digging into each other mercilessly and without cessation. The Thrombey clan are the definition of “dysfunctional,” and all of them are ready to sell one another out to get at Harlan’s considerable estate holdings; the kinds of personalities these entitled pricks have make you hope none of them receives anything. Most of the actors are given juicy and depth-filled characters which they fill in with varying levels of despicability, granting us the power to hate them on a sliding scale. 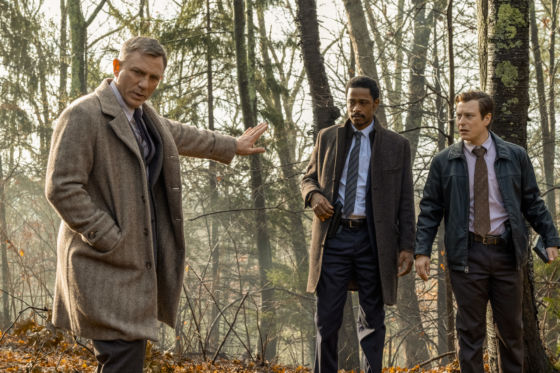 In direct contrast to how we feel about the Thrombeys, we come to love Blanc’s head-scratching style through Daniel Craig’s impeccable performance. He gives Blanc a thoughtfulness and a third eye capable of catching what the official police detectives miss, and he strides through this film with confidence and swagger, with the merest hint of uncertainty visible at the fringes. So, too, do we find ourselves in love with Ana de Armas’ Marta, a role she imbues with an innocence which shines among the Thrombey wolves. As written, Marta also carries a bit of political baggage which the film uses to alternately humorous and unfortunate extents. As Harlan’s eldest daughter Linda, Jamie Lee Curtis hits no false notes as a shrewdly cold and calculating businesswoman who treats the investigation – and her family – like the festering annoyance it all is. Truth be told, there’s not one weak link among the performers, each giving us reasons to laugh or shrink away in revulsion. 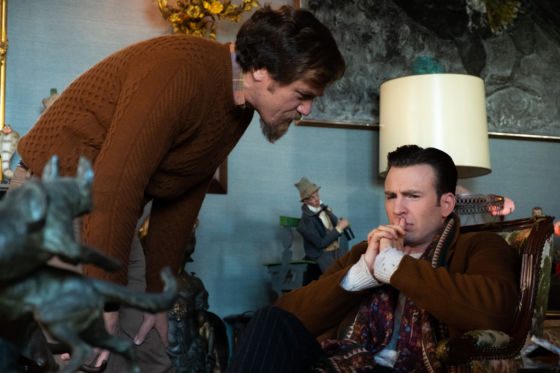 Careful and glowing attention is paid to the film’s visual aspects, relishing the sumptuous settings of the Thrombey mansion and the rooms in which much of our story takes place. Befitting its Agatha Christie-like nature, the Gothic house is imposing and threatening with its sharp points and brooding look, seating us immediately in the familiar. The entire estate, its exaggerated appearance, and its quirks are cleverly woven into the story, becoming characters themselves and serving the plot in more ways than being mere structures. 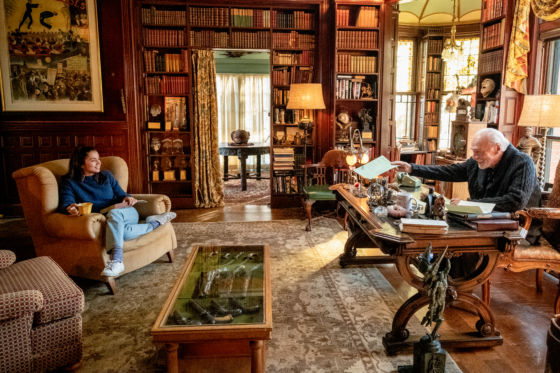 All of it is captured by Rian Johnson’s frequent collaborator Steve Yedlin, whose gorgeous and engaging cinematography envelopes us in thick and colorful surroundings. He makes sure to evoke images of past whodunits while fashioning new mystery genre staples of his own, guaranteeing our involvement and helping us sink further into the film. Likewise, Johnson’s cousin and mainstay composer Nathan Johnson’s timeless, agitating score hearkens back to crime thrillers and horror movies, melding with and amplifying the film’s visuals with lush, layered instrumentation and pitch-perfect, scene-appropriate accuracy. 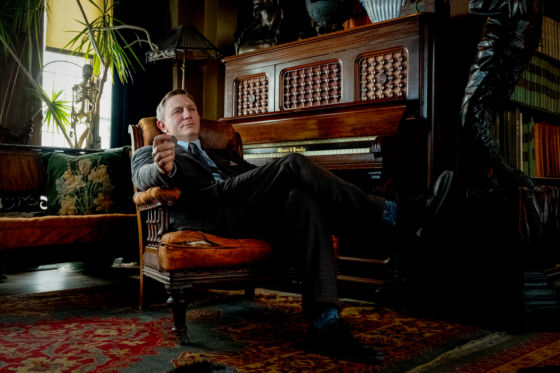 Do not miss this film, and do not be late to the theater. Every second is crucial to the film’s enjoyment, and there’s a whole lot of enjoyment to be had. Rian Johnson knows he has an embarrassment of riches in front of and behind the camera, and he doesn’t hesitate to make the most of it. Arguably one of 2019’s best films, Knives Out is the punchy, scrappy upstart in this time of year, the season where studios relentlessly push their Academy Awards efforts, and it’s also worthy of standing proudly among them.

Knives Out is the punchy, scrappy upstart in this season where studios relentlessly push their Academy Awards efforts, and it's also worthy of standing proudly among them.