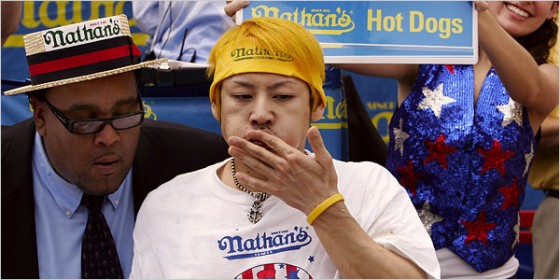 One of our favorite 4th of July celebrations happens at Coney Island each year. It is the Nathan’s Famous Fourth of July Hot Dog Eating Contest. For me I never knew how serious the world of competitive eating was until I read about Takeru Kobayashi not being allowed in the hot dog eating contest. Apparently since he did not sign an exclusive contract, he was banned from the MLE. What is the MLE you ask? The MLE stands for Major League Eating. Yes, there is such a league.

So despite being banned, Kobayashi still has the hunger to compete, and was looking for a way to show he is TOP DOG! (Sorry for the two puns…I could not help myself.) Kobayashi is teaming up with Jose Cuervo to compete in the contest. When the official event begins on television, he will commence eating at a New York City bar that is hosting his attempt and will stop after 10 minutes when the competitors he is “virtually” racing are forced to stop.

If the six-time champion can eat more hot dogs than the crowned winner at the Coney Island event this Fourth of July, Jose Cuervo has offered him an all expenses paid trip to its historic Tequila distillery, La Rojeña, located in the heart of Mexico’s Tequila region. In addition, Cuervo will immortalize him with a customized bottle of Especial Gold that dons his image on the label. Who needs Nathan’s when you’ve got Jose Cuervo in your corner? So this July 4th, lets see who will be the winner of the hot dog eating contest, Kobayashi or the rest of the field. My bet is on Kobayashi! For more info check out Jose Cuervo.com.