Kobe Bryant Refuses to Lose at Anything Basketball Related 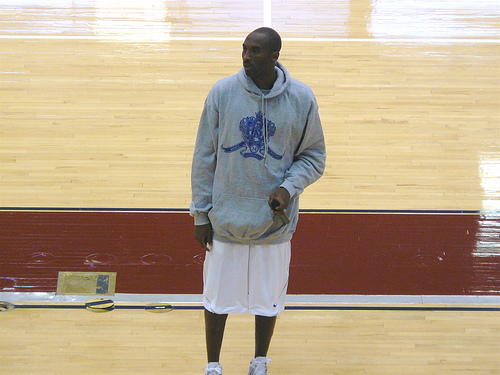 We all know that Los Angeles Lakers star Kobe Bryant is rather competitive about the game of basketball. However as evidenced in the two below videos, Kobe refuses to lose at anything basketball related even if it’s a children’s game.

Both of the videos come to us from the Kobe Bryant Basketball Academy which is currently being held in Santa Barbara, California in which Kobe helps younger players improve their skills and teaches them the life lessons that he has learned.

During the camp, rapper Bow Wow showed up and bet $1,000 dollars that he could beat Kobe at a game of one on one where each player could only take jump shots. Sadly, Bow Wow never stood a chance:

After that, Kobe Bryant and the kids ended the day with a classic game of Knockout which on the outset appeared that Kobe was going to take it easy on the kids until his first shot of the day:

So kids, if we have learned anything from these videos, if you’re playing any sort of basketball related competitive activities, never face Kobe Bryant in them.