This review started at a 2.5-star rating, but I’ll let you in on a little secret: the more I think about and analyze the movie, the more I like about it. At first, I thought there are major issues keeping this film from being absolutely great, but some of those issues are also part of why Kong: Skull Island is a rare film. It may feature one of the most arid scripts, and it might seem the director isn’t interested in bringing said script to life wi th anything but the barest minimum of effort by the actors involved, but it all combines to make one unapologetically thrilling adventure.

Let’s get my own personal baggage out of the way: I despise films with an overabundance of computer-generated imagery (CGI). Making audiences watch a non-cartoon film where much of the visuals are constructed inside a computer makes me feel like I’m back at my college dorm room, sitting around while my friends played video games. (I said something similar about Pacific Rim.) In this vein, Kong: Skull Island sometimes feels more like watching someone else play a first-person shooter – running through jungles, shooting at all manner of creatures trying to attack, eventually making it all the way to the boss battle – rather than a film itself.

That said, Kong: Skull Island makes the most of its CGI world, boasting some of the most impressive special effects work I’ve seen in a while. The photorealistic looks of Kong himself and the apex predator Skull Crawlers (creatures which look like a steroid-jacked, dessicated, prehistoric alligator) make it easier to suspend one’s disbelief in a film packed full of the unbelievable. All the creatures don’t look or move like the herky-jerky composites found in films like Peter Jackson’s The Lord of the Rings or George Lucas’ Star Wars prequel trilogy; every living thing on Skull Island looks like it lives and belongs just where they are. 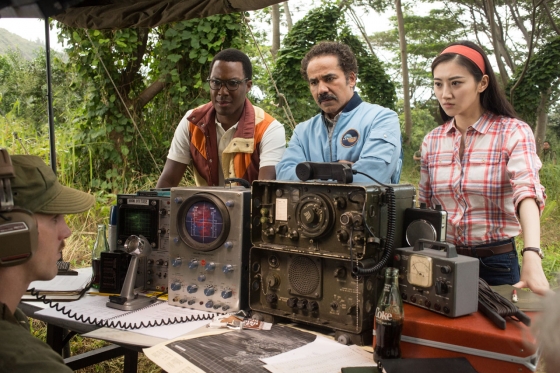 That’s the crux of the story: Skull Island is uncharted and unexplored, cut off from the world by a constant wall of storms mystically surrounding it to keep intruders out. It’s Kong’s island, so of course he’s going to be a little rattled when a US Army helicopter squadron blankets the island with seismic charges (intended for use as an early version of a ground-penetrating radar measurement system, but seriously, they’re frickin’ bombs!). At times, we see shades of an obvious Apocalypse Now influence upon Kong: Skull Island without being insulting or resorting to outright thievery. The strong parallels to the Vietnam War (the closing years of which serve as this film’s timeframe) are almost too easy to pick up on – the Army goes into a land where the indigenous population may be too much for them to handle, along with some other surprises – and it’s almost too coincidental that the film’s leading moniker is Kong (anyone wanna play the homonym game?) with no King before it. 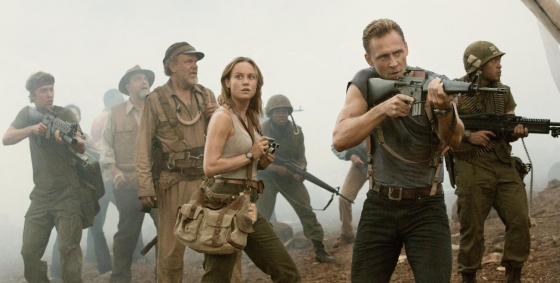 Dan Gilroy and Max Borenstein’s script offers only as much story and development as the payoff needs. Characters are whittled down to the bone, removing any sort of original personality, becoming drone-like tropes instead of characters which you want to get behind. The Wikipedia character summaries for the film carry more weight and depth than what you’ll actually find onscreen. Don’t expect any grand character revelation or twist; these folks are just bodies meant to fill the screen, almost a perfect metaphor for how a military counts on numbers to be its strength. That they are not given much due is actually one of the reasons this film moves like an unstoppable juggernaut and moves well; it also gives the film a military-like “get the job done and get out” feel, Apocalypse Now references notwithstanding. 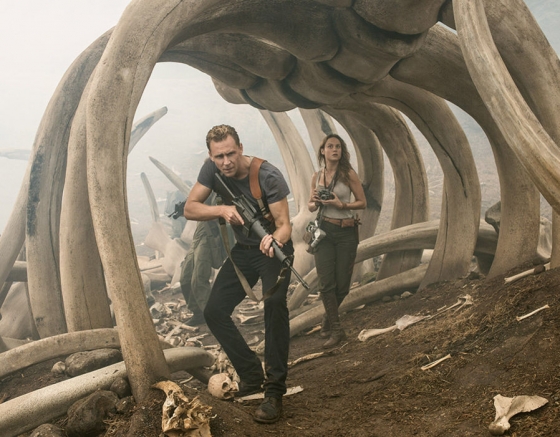 You’ll find your stock-standard victims and heroes among the human factions: the crazed island survivor (John C. Reilly); the stalwart mercenary (Tom Hiddleston); the soldier with the perpetual thousand-yard stare who’s “been in the shit” too long (Shea Whigham); the peace-loving photographer (Brie Larson); the scared and frenetic, fresh-out-of-boot-camp newbie (Thomas Mann); the man with the dark purpose behind the mission (John Goodman); and Army Colonel Packard (Samuel L. Jackson, surprisingly at his non-Samuel L. Jackson-iest) who’s just been pushed over the edge.

All of these characters – and many of the unnamed ones as well – serve as fodder for whatever battle they find themselves in, whether it’s with Kong himself, a spider whose legs are as long as the trees, or the aforementioned Skull Crawlers. It’s worth paying attention to some of them, especially considering it’s a science mission they’re meant to be carrying out, not a military one; as a result of the casualties brought on by their first meeting with Kong, Colonel Packard makes it a military mission. The film follows two divisions – the revenge-bent soldiers led by Colonel Packard, and the scientist/pacifist group more intent on surviving by falling in line with the island’s rules – and how never the twain shall meet. 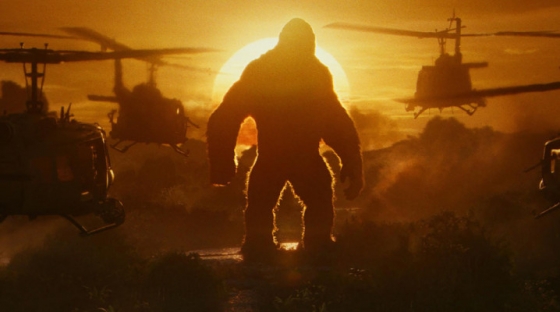 The best aspect of Kong: Skull Island is its near-unmerciful sense of adventure and danger. Kong appears straightaway, with no teasing or insinuations; as soon as the helicopter squadron crosses his path, it’s on, and it stays on all the way to the end, even past the credits. The story and script all revolve around being in Kong’s world, with the human factor being almost inconsequential, which to me stands out as being a cunning way of treating you to its delights. On both sides, for both humans and creatures, it’s a game of survival at all costs, with the humans momentarily sharing the peril Kong faces on a daily basis. When we see what kind of a world Kong lives in, where death comes out of the ground at lightning speed and has shredded the rest of his family, we’re left only to stand agog at ruined beauty that is Skull Island.

The best aspect of Kong: Skull Island is its near-unmerciful sense of adventure and danger.