Media > Movies > A Tribute to the Star Wars Kowakian Monkey-Lizard

Salacious B. Crumb is the Kowakian Monkey-Lizard in Return of the Jedi, and the court jester of gangster Jabba the Hutt. Crumb has one of the dumbest names in all of Star Wars, so from here on out we’ll just call him Salacious. You can read about Salacious’s backstory on Wookieepedia. 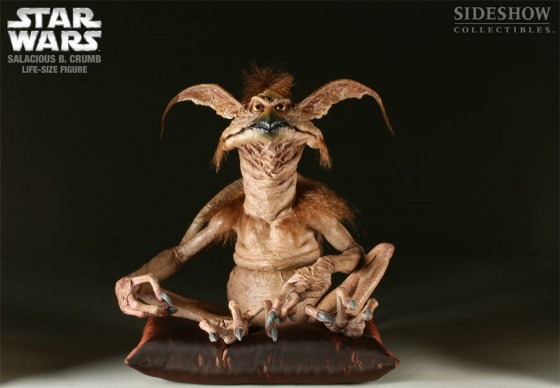 A life-sized statue of Salacious was made by Sideshow Collectibles and limited to 600. It’s now sold out and sells for significantly more than its original $349 asking price. Since it’s life-sized, we know Salacious weighs about 24 pounds. Here’s a video review, with a cat!

Sideshow makes three other versions of Salacious, two of which only come as bonuses for other sets. The other is the Salacious Creature Pack, which comes along with other figures.

Salacious as a Lego

Typically, Lego rules. But between Jabba the Hutt and Salacious, it’s safe to say these are the WORST LEGOS EVER. Princess Leia is still hot, though.

Wait, here’s a better one: Salacious as a Kubrick, whatever that is.

For realzzzz? Yes, the Salacious Plush is available on Amazon, along with a Jabba the Hutt that looks like a turd.

Oh, the memories of playing with this little guy. You can purchase it here, without Jabba: Vintage 1983 Star Wars Salacious Crumb from Jabba the Hutt Action Playset.

In a Christmas hat? via brianstoys.com.

There are actually more figures, but most are pretty lame. And in conclusion, the one thing we couldn’t top…

Salacious as a Vegetable