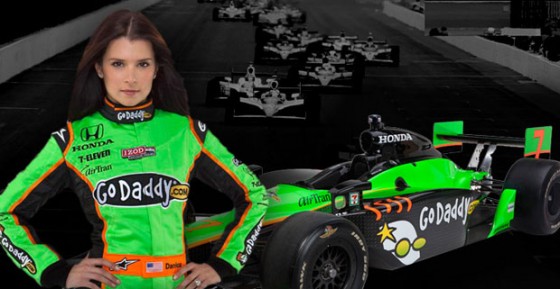 Danica Patrick has moved to NASCAR, and sadly will not be competing at this year’s Indianapolis 500. Even though the most famous female name in racing won’t be present, four other ladies will be competing in the field of 33 this Memorial Day weekend. The sport of Indy Car racing has come a long way since Janet Guthrie became the first female driver at the Indy 500 back in 1977. We thought we’d take this opportunity to introduce you to the four ladies you’ll see on the track this weekend. Profile information is quoted from Yahoo Sports, see their full article for more details on these ladies.

The 28-year-old Brazilian competing in the IZOD IndyCar Series was the first woman in the world to win in the Firestone Indy Lights and in the Formula Renault. That’s not too shabby for a racecar driver, who began kart racing when she was only 12.

In 2008, Ana Beatriz won her first Indy Lights Series at the Nashville Superspeedway. The next year, she won Indy Lights again. That same year, she became the first woman to a race event at Iowa Speedway.

Last year, the 32-year-old Brit joined Dragon Racing in the IndyCar Series. While her showing in the 2012 Indianapolis 500 race was 22nd after starting from the 30th position, it wasn’t all bad for her rookie year on the oval track at Indy.

The hard-driving Legge is piloting the Dallara/Honda/Firestone 81 car, the third entry for Schmidt Peterson Motorsports this year.

The Swiss driver is young but has a number of starts under her belt. At 24, she has 49 starts and six in the money finishes in 2009 alone. And get this: Simona de Silvestro aka “Swiss Miss” and “The Iron Maiden,” earned a record-breaking nine podium trips at the 2009 Atlantic Championship Season.

After she brought her A-game that year, she hit a milestone in becoming the first woman in series history to lead the most laps, win the most poles and log the most victories. This year marks her fourth start at the Indy 500: two with Honda, one with the shabby Lotus car and this year with Chevrolet.

The 29-year-old Brit started single-seat racing a decade ago. Since then, she’s logged 27 Firestone Indy Lights Series starts, has one win (Kentucky Speedway) and qualified for three poles.

Since landing in open wheel, Pippa Mann has changed teams several times, but appears to have found a home with Dale Coyne Racing.

Mann, like Ana Beatriz, starts the Indianapolis 500 deep in row 10. However, if her performance is anything like the 2011 Indy 500, she’ll have no problem finding her way through traffic. Back then, she qualified for 32nd place and moved up 12 positions.