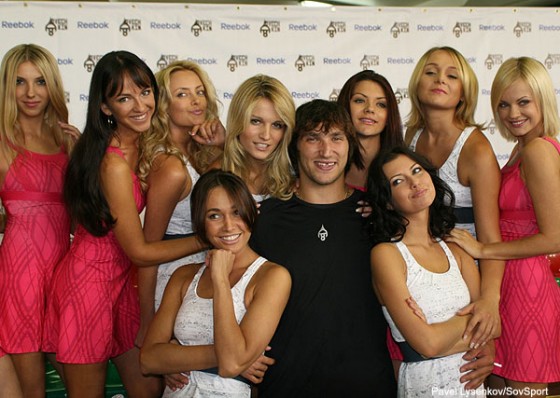 Alexander Ovechkin hosted a party to launch his new clothing line in Russia yesterday and the picture above is from the event. Puck Daddy has a full translated story on the festivities, and an interview with Ovie. We’ll just point out some of the highlights :

Ovechkin arrived at the event in a double-decker Hummer limo. The door opened upward like a DeLorean and an army of blondes and brunettes poured out. The organizers explained that the girls were models and singers from a couple of popular Russian pop bands.

Q. Blondes or brunettes?
Ovechkin : Redheads.
Q. An English word you say the most?
Ovechkin : It starts with the letter “F”.

Earlier in the month, Puckdaddy carried another Russian interview with Ovechkin :