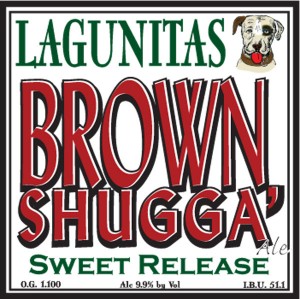 Information: (Site) “How come you tast so good?? 200 pounds of pure brown sugar in each 30-barrel batch, that’s how! This strong ale leaves a lot of stories in it’s wake.”

I have, as do most people, a love/hate relationship with sweet beer. I really like chocolaty Stouts just fine, and the Imperials and special Chocolate and Double-Creams seem to be the sweetest of the bunch, but even then, sweetness is relative. Some people believe that just the chocolate/mocha flavor alone is enough to warrant a sweetness label, but that’s not always the case. I’ve had a Pumpkin beer that reminded me so thoroughly of actual pie that I got that ‘sweetness’ idea in my head, even though it really wasn’t. So you see, it’s all a matter of taste. Now this particular sample proudly touts the fact that it’s brewed directly with a whole bunch of brown sugar. I have a feeling this is going to be really sweet.

The pour leads to a rich amber color and its topped head that foams for a bit and quietly gives way to a solemn white ring. But it’s the aroma that positively sings with a flurry of different smells. It’s very yeasty, very, very hoppy, and a whole bunch of bitter even before the first taste is in the mouth. It’s floral, earthy, and there is a hint of the molasses that makes brown sugar, well, brown.

Quite the variety of flavors as well. The first taste, despite the previous barrage of scents, was not at all what I was expecting: It is definitely a sweeter fare, but still not to the point of being distasteful. It has a piny, hoppy flavor that really sits atop the sweetness almost matching it in intensity. In fact, it’s the battle of those two flavors that really make this beer almost a quandary to drink. First, you have the hit from the molasses (brown sugar) followed immediately by the hoppy bitterness and that floral, fir tree addition. The package touts this as a Holiday Brew and I am very inclined to agree with them, yet, as much as I’d like to say it doesn’t remind me of sucking on a sugar-coated piece of holly, well, I can’t. It’s interesting, it’s flavorful, but it’s by far an acquired taste that might catch some of the more unaware completely off guard. Enjoy it with a branch from your Christmas Tree… I’m kidding, this would be really good with turkey, honestly.

An odd amalgamation of bitter hops and sweet sugar. Bizarre but interesting.