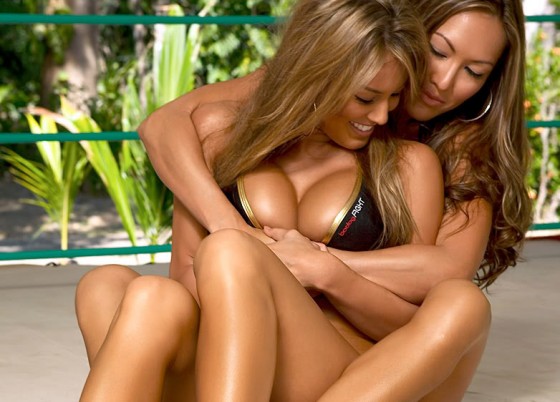 Disclaimer : We're not certain these ladies are actual fighters.

Ah, the female form. How lovely, how lithe, how graceful in action. Even the most boring drudgery of boot camp PT can be made infinitely entertaining by the addition of one simple element: hot, hot women. Is there any activity a beautiful woman can’t improve? Well, besides hemorrhoid surgery?

She could submit us any time. By which we mean, painfully and not at all in a sexual way.

We don’t think so.

Traditionally, the term “chick fight” has conjured up images of yanked hair, catty fingernail attacks, and the occasional boob slippage. Entertaining? Damn straight. But exciting to watch purely for the brutality and skill? Christ no. Not even a little bit.

Women have been boxing for years now, but if there’s one thing that goes on inside a boxing ring that’s more boring than a heavyweight boxing match, it’s a female boxing match that doesn’t involve lubricants in some way.

If you don’t follow what we guess is called WMMA, you probably haven’t heard of either of these fighters. That’s okay, neither had we until just a few days ago. We happened to stumble across this video while searching for, um,  something else.

The fight starts out like any other lady fight, which is to say it’s pretty goddamned boring. Then, around the 1:40 mark, things get exponentially more interesting. And by “interesting”, we obviously mean “brutal”. Not, you know, “naked”.

The pigtails make it easier for her to break you

The cute, french-braided and yet still undeniably frightening Jennifer Howe just starts bringing massive amounts of what experts call “The Business” to Tara LaRosa. The Business, in mathematical terms, is expressed like this: (The Pain {a} + The Noise {n} – Jibber-Jabber {x}) * Time {t}.

To put that into perspective: one “The Business” is equivalent to roughly three “I Pity the Fools”.

The levels of The Business Howe brings to LaRosa are almost too intense to watch. Almost.

This fight clip is about twenty seconds long. That’s long enough to learn two important facts: 1) Gina Carano is very, very hot and 2) Gina Carano is an animal in the ring. A sexy, sexy animal.

Carano’s ground-and-pound is one of the most wicked attacks in women’s MMA. When she mounts poor Laticia, you can tell by her posture that things are about to reach Phillip Seymour Hoffman levels of ugly. Also, we just noticed how refreshing it is to discuss “mounting” and “ground-and-pound” without sounding like the narrator of the most homoerotic show ever on Discovery Channel.

Oh, and a third fact that clip confirms: Steve Mazzagatti is a terrible referee. Maybe that’s why he refs so many women’s MMA fights: the powers that be are hoping he’ll try to cop a feel and end up paralyzed from the dick up.

The first thing you’ll notice is how fast and intense this fight is. Cyborg Santos, who may or may not actually be a T-X prototype, goes on the attack and keeps on coming. She comes on like a 3am dick pill infomercial and just doesn’t quit until everything is swollen and tender.

The second thing you’ll notice is that Shayna Baszler can take a punch better than half the guys reading this article right now. Considering the sheer force behind Cyborg’s punches, Shayna Beszler’s orthodontist probably now has a private jet and his own Illinois senator.

There’s a brief interlude wherein Cyborg, in an uncharacteristic display of emotion for someone made almost entirely of titanium, knocks down Baszler and just sprints to the other side of the ring in victory.

After Mazzagatti finally calls her back down to finish the fight, things get damn near too brutal to watch. In the final minute of round 2, Cyborg starts dropping bombs like some kind of unmanned laser-guided…bomb… dropper?

Finally, almost mercifully, Shayna is backed up against the ring, just absorbing punch after punch, taking more straight, hard shots to the chin than Perez Hilton in a Vegas nightclub bathroom. When that last right-hand hook comes in and turns out the lights, it’s a blessing. Shayna Baszler takes an ass-beating so hard even Ike Turner would look away in disgust.

Was it a judo throw? Maybe. Was it dumb luck? Probably. Did that shaggy haired girl whip the knobby haired girl’s face into the canvas hard enough to knock her unconscious, and then put a mean-ass arm-lock on her?