With the NFL season kicking off in a few days its the last chance to draft your championship fantasy team.  You might have already drafted in other leagues, but if you want to get your last minute drafts right, read on.

The most basic thing is to know your league rules, as that has more effect on who you should pick then anything. Points Per Reception league? Elite wide receivers get a boost and you should try to get one.  Do you start two running backs, two receivers and a flex in a non PPR? We suggest going RB – RB – RB unless someone you love drops, as being able to field 3 starting running backs every week is preferable to having two elite wide receivers. Yes, there is a small pool of “Elite” receivers, but that next tier is gigantic and the difference isn’t enough to matter if you wind up with a bad RB3. 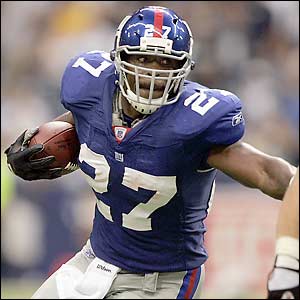 Put it this way, would you rather have the 32nd best running back (say, Brandon Jacobs) forced into your starting lineup or the 32nd best receiver (Collie/Floyd)? Any given week there are only 32 starting running backs (and fewer than that you want to play) while there are 40-50 “starting” quality receivers. So, in leagues that dont skew to the wide receiver (PPR, 3WR, ect) Im going RB-RB-RB.

The truth of the matter is that, really, the strategy in the first couple rounds doesn’t matter that much. Yes, you can manage risk, and get lucky/unlucky with injuries, but rarely are leagues won in the first 3 rounds. The key to winning is very rarely identifying that year’s top players who will stay elite, but rather identifying those players who will break out and provide surprise value from the later rounds. That is where the real draft strategy comes in, how you fill your back up roles. Are you taking an extra defense or tight end? Are you drafting an over 30 WR3 or WR4? Are you drafting the third receiver on a good offense because of his past numbers? Are you taking a handcuff to one of your own players just because he is the backup?

It’s your ability to identify the breakouts that make the difference, and in that vein we  give you the six rules for drafting backups.

1. Only handcuff your star RB if the offense is geared to produce a top runner and the backup has not proven to be a poor starter. Bernard Scott might just score 8-10 points a week if Cedric Benson goes down, but that’s still a poor replacement, and odds are that same pick could have gotten you an Arian Foster last year. Other guys to avoid are Earnest Graham (TB), Marion Barber (CHI) and Isaac Redmond (PIT).

2. Only carry 1 backup WR. If there is a high upside guy you love (for example, Greg Little) then take him for that role, and then pick up a waiver replacement for bye weeks if need be. There is no point is carrying Derrick Mason as your third WR in a 2 WR league. You already know what he brings to the table, and he is not going to win you any games.  There is a large pack of mediocre receivers in the league this year, the last thing you want to do is invest too heavily in them.

3. When all else is equal, pick a TE with a late bye week. Its amazing what you can do with a roster spot to play with for nine weeks when you can just start Mercedes Lewis and forget about him. You will see teams that took a quality backup Tight End drop it long before you need it, and you will be able to grab one off the waiver wire at that time. Same goes for kickers and defenses. Worst case scenario you can always pick up the defenses that are playing bad offenses each week.

4. Don’t spend too much to back up your stud QB. If you drafted Brady in the third round and he goes down for the year you are probably screwed anyway, using a 10th round pick on Joe Flacco isnt going to help much. Especially when a guy like McCoy or Campbell will be on the waiver wire for the taking. That said, it never hurts to grab that Bradford or Flacco that gets dropped after covering a bye week.

5. RB – RB – RB. Take as many young running backs as possible. It doesn’t matter whose handcuff they are, the more the merrier. If you have 6 bench spots, 4 of them should be running backs, ideally young ones in run first offenses. Backups to aging starters are always a good pick. Arian Foster (and Blount/Hillis) won a lot of leagues last year, you want to put yourself in position to have that guy this year. While its often hard to predict breakouts, having more chances is better.  Names to watch include Kendall Hunter (SF), Ben Tate (Hou) and Jacquizz Rodgers (ATL).  These are your lottery ticket picks.

6. Target number one wide receivers on teams with bad defenses. While they are rarely sexy names, when you are filling that last WR spot take a guy who is his own teams number one target  Especially if its a team that will be playing from behind most of the season. Lance Moore and Brandon Marshall had similar totals last year, but you know that Moore is never going to be the main target on his own team barring injury, while Marshall could see 3-4 more targets a game due to the lack of options and the odds of them trailing often. If he converts just one of them each game you are probably talking about another 20-40 points at the end of the year. Mike Thomas might have no one reliable to throw him the ball in Jacksonville, but he’s being taken behind Hines Ward, who is the third or fourth option on his own team.

Lastly I just want to say to have fun.  No one should be trying to make a living at fantasy football, so the bottom line is that this is something you do for fun. If you aren’t having a good time with your league, for whatever reason, then have them replace you.  Fantasy sports are a great way to compliment your enjoyment of the game, stay in touch with old friends and avoid work for a few minutes a day. If it ever becomes more than that, then its time to stop playing. Good luck, and enjoy gloating for the next twelve months.