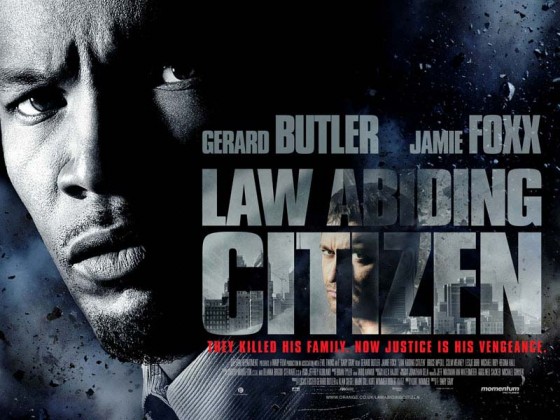 We normally love a ‘good guy flips out and takes matters into his own hands’ movie, a la ‘Death Wish’, ‘Falling Down’, ‘Straw Dogs’ or even last year’s ‘Taken’.  We root for the wronged and bathe in the justice.  But ‘Law Abiding Citizen‘ starts off on the right foot then takes us down a path that leaves us questioning who we should be rooting for by the end. 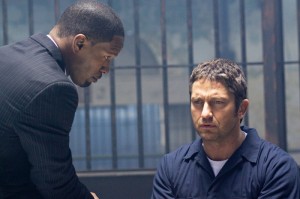 "You're blaming it on the a-a-a-alcohol?"

Gerard Butler stars as Clyde Shelton, a man whose wife and daughter are murdered and God knows what else during an opening scene home invasion that is honestly fucking brutal to watch, even though it’s not even very graphic.  Jamie Foxx is Nick Rice, the District Attorney who accepts a plea deal by one of the two attackers, without consulting his client, which gets one guy the death penalty and sets the other free in five years time. 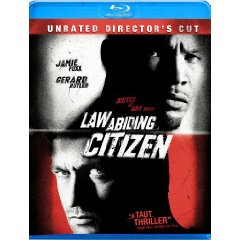 Out now on DVD & Blu-Ray

Fast forward to 10 years later and Shelton has been spending a few minutes or so working on his revenge plan.  He abducts the now-free murderer and deals out his own brand of justice.  We would’ve liked to have seen more of Shelton’s grisly payback, but we’re only treated to the first cut and the aftermath.  The cops soon pick him up at his house, when Shelton really sets the wheels in motion.  From jail, he manipulates the system and works DA Rice’s strings like a marionette, attempting to teach him how he feels the system should work.  Along the way he continues to murder everyone involved in allowing the murderer to walk free, even from solitary confinement.  Rice races to find out how he is doing it and to stop him before he takes the whole city down, his family along with it.

While ‘Law Abiding Citizen’ drills into your emotions, from the opening scene to the initial revenge, to the suspense of who will buy it next and how, one of the most important part of any movie is the emotional attachment to a character.  We lose sympathy for Shelton once he starts killing everyone but the guy who did it, which takes a lot out of the sails.  If the ‘how is he doing it’ and ‘how will it end’ weren’t enough, ‘Law Abiding Citizen’ would have been a failure.  But it’s not and is still definitely worth checking out, although the ending will make you question the point of the entire movie.