If you are considering becoming an expat in China, it may make you happy to know that China has an abundance of Lay’s Potato Chips. But before you get too excited, you need to know that the flavors in China are completely different from those of the western world. Here, to make your transition to The Mysterious Orient that much easier, are the Top Ten flavors of Lay’s Potato Chips in China. 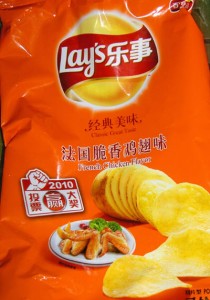 Perhaps a brainstorming session in the Chinese division of Lay’s Potato Chips went something like this: “I’m going to say a word, and I want you to say the first word to pop into your mind, and that’s the new flavor we will create. Okay… French.” And then somebody blurted out “Chicken.” And then the first guy was like, “Cool! That will be our new flavor for China.” Then they sent the idea to the lab and told the flavor scientists to come up with something that would make sense if they called it “French Chicken.” The thing is though, it isn’t good at all. How is French Chicken supposed to taste, anyway? What is French Chicken exactly? Does it have a terrible after-taste? Because these chips sure do. French Chicken flavored Lays Potato Chips- Yuck! 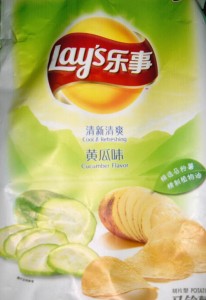 Imagine the taste of a cucumber. Pretty good, right? Refreshing? Cucumber slices are a great, healthy snack. In a salad, they can not be beat. They even taste good lightly flavoring water, ala a lemon. But as a flavor of potato chip? Uhm… no. 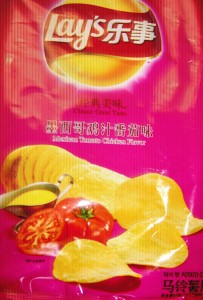 Here we go with chicken flavored potato chips again. There are some things that you naturally expect to taste like chicken, like, oh say… chicken. Chicken tasting like chicken on its own is great. Why force the flavor onto food products where it doesn’t belong? Seriously, are there even any chicken recipes that include potatoes? Why ruin the integrity of either product this way? The saving grace of this potato chip however, is the accompanying tomato taste. It gives it a nice little added zest that the French Chicken flavor so woefully lacked. Take that, France! 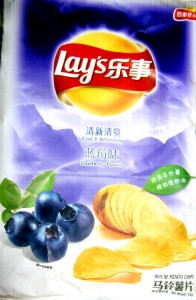 You may say to yourself, “A potato chip flavored by the sweet, in-your-face flavor of the common blueberry? That’s crazy!” In theory, it does sound crazy. We’re not arguing that one bit. But in actuality, you know what? The taste of the blueberry is underscored by the natural saltiness of the chip. The two actually compliment each other. A blueberry flavored potato chip? Yeah man, it actually works! 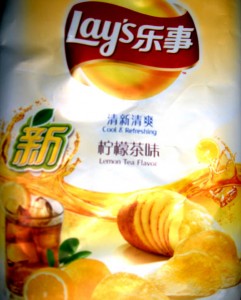 There is absolutely no reason to make a potato chip flavored with one of America’s favorite cool, refreshing beverages : lemon tea. But hey, why not? This is a very tasty and mellow chip. A light taste of lemon accented with a light taste of what seems to be Lipton Tea, mixed with the starchy goodness of a potato chip; it may sound a little unusual, but it’s really good.

“Little Tomato”- sounds like the name of an Asian cartoon character, does it not? “Hello Kitty, this is Little Tomato, and he is sad. Can you cheer him up?” These chips- seriously, they are good. The Western world should be so lucky to have these on the shelves of its super markets with its perfectly balanced zing of tomato taste. For real. 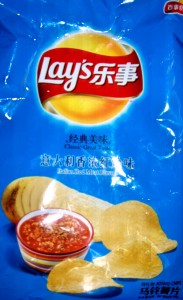 Ever been to a Subway Sandwich place and gotten one of their meatball subs? You know that flavor it has that makes it taste like what we Westerners assume to be “Italian?” These potato chips taste like that. They’re good!

In the 1980’s, America’s number one treasure (aside from Mary Lou Retton and Tootie from The Facts of Life) was a Cajun Chef named Justin Wilson. The Ruffles Potato Chip Company had this big idea to cash in on his success and get him to be the spokesperson for their newly developed chip, Cajun Spice. Numb and Spicy Hot Pot Flavor tastes a lot like those old chips, only Asian. That is to say, they taste very good. They are infinitely more fun to eat, however, if you imagine the dude pictured on the bag saying, “Dis is just a flat old tater chip. It’s just flat. It’s just a potato. But not this! It’s a new Numb and Spicy Hot Pot Flavor from Lays that you’re gonna love, I garontee!” 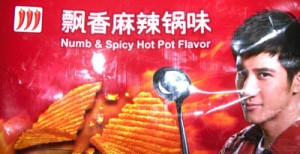 And the number one Lays Potato Chip flavor in China is…

Perfect in its simplicity. A potato chip flavored with salt. What else does it need? American Classic indeed. 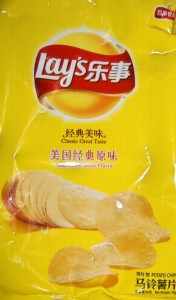 The Art and Science of S’mores